France, 1943. In Lyon, amidst the roundups, barbarism and inquisitions, the French Resistance was gaining ground. Losing faith in Pétain and his politics, the Lyonnais turned to the clandestine resistance movement, a lifestyle fraught with risk.

Montluc ceased to be a military prison in February 1943, at which point the Gestapo transformed it into an interrogation centre, prison and internment camp. For many, it was a holding pen prior to being transferred to Drancy; for others, it was to be their final resting place. Today, the Mémorial National de la Prison de Montluc is open to the public, offering a heart-wrenching insight into the fate which awaited those who sought to free France from the German Occupation.

I was aware of the Centre d’Histoire de la Résistance et de la Déportation prior to arriving in Lyon, but only came across the Mémorial National de la Prison de Montluc recently. Having identified it as a potential point of interest for my sister – who visited the other day whilst waiting for me to finish work – I decided to visit myself yesterday afternoon. Sandwiched between Armistice Day and Remembrance Sunday, I couldn’t have picked a more apt time to visit. The timing of my visit also enabled me to acquire a ‘Bleuet de France’, the French equivalent of a remembrance poppy, just in time for Remembrance Sunday.

After being buzzed into the reception area, an employee led me across the courtyard to begin my self-guided tour; free guided tours in French are also available once or twice a day depending on the time of year.

Some preliminary information about the Second World War and the Nazi invasion covered the walls of the first room; a series of information plaques hung from the ceiling in the second, peppered with black and white photographs, testimonies and hard-hitting facts.

Under the governance of the notorious Klaus Barbie, detainees were deprived of basic sustenance and sanitation, tortured, then deported or executed. Known as the “Butcher of Lyon”, Barbie was eventually tried and convicted of crimes against humanity in France in 1987.

Spread over three floors, a hundred and twenty two cells tell the stories of their deceased inmates: doctors, intellectuals, politicians, historians, journalists, nuns and families. Whilst hundreds – thousands, even – died in Montluc at the hands of the Gestapo, many survived, later serving as witnesses in war crimes trials.

Following his arrest, Jean Moulin, a high-profile member of the French Resistance, was briefly interned at Montluc in 1943; he later perished on a train bound for Germany.

[Can seeing another man be shot help another detainee prepare himself for death? Did they hear the other detainees leave to die? What did they do with the bodies?] 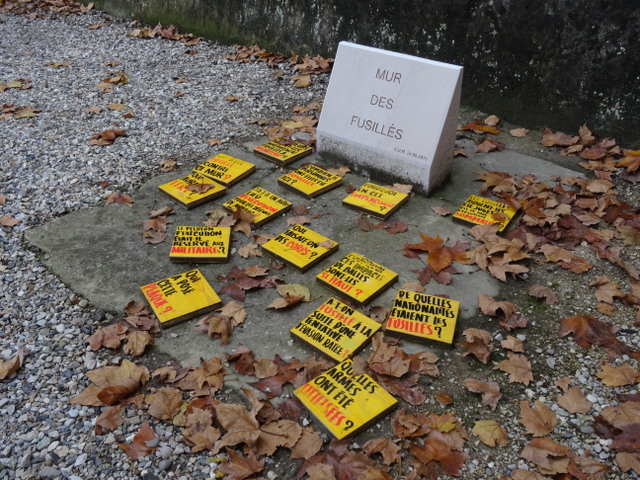 The vast array of literal and philosophical questions – which were all posed by visitors to Montluc but uncannily parallel inmates’ own concerns and fears – encourage visitors to reflect on their visit.

Touring the grounds and peeking into outbuildings, it was difficult to imagine hordes of people crammed into these tiny spaces. Despite all of the information boards, the events which took place in this unassuming coffee-coloured building and its derelict outbuildings elude comprehension and remain indescribable, beyond words.

Estimates suggest that some ten thousand people were interned at Montluc between February 1943 and August 1944. Hundreds were sent in convoys to Drancy or, worse, directly to the concentration camps in Eastern Europe. Hundreds more were shot – in Montluc itself and in other secluded locations in the Rhône-Alpes region. We will remember them.