Straddling Mount Haku in the remote Ryōhaku Mountains is one of Japan’s most picturesque – and authentic – human settlements, dating back to the eleventh century. With its traditional gasshō-zukuri farmhouses, expansive rice paddies and jaw-dropping natural surroundings, Shirakawa-go was a must-visit for us while we were in Kanazawa.

After picking up some breakfast goodies at Donq, a relatively authentic boulangerie française, we caught the 09:40 bus to Shirakawa-go. Snapping up the last two tickets on the bus came with the caveat of sitting apart, but we weren’t too fussed as we’re both professional snoozers on buses. Upon arrival in Shirakawa-go we promptly picked up maps, crossed the suspension bridge and followed signs down the main street to Ogimachi Joseki Observatory. 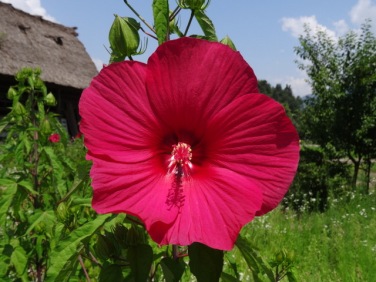 Opting for the Observatory Stroll Road – which was actually a series of steep steps, not that that stopped one woman attempting it in high heels! – we were soon rewarded with a spectacular aerial view of the village. Scattered across the clearing at the foot of the densely forested mountainside were dozens of gasshō-zukuri farmhouses surrounded by verdant paddy fields.

We then took the Route to Observatory path back down into the village, passing some of the gorgeous gasshō-zukuri houses which bordered the forest en route. Gasshō-zukuri farmhouses are characterised by their steep thatched rooves, which are said to resemble hands pressed together in prayer, and authentic construction techniques. Their unique design protects the houses in years of heavy snowfall, as it prevents snow from building up on the rooftops. Although they’re an irrefutable fire hazard, I have a soft spot for thatched cottages – their olde worlde aesthetic is just indescribably beautiful.

After pausing to admire the towering sunflowers, we entered the Myozenji Temple and House (¥300; £2.32). Fashioned as a museum depicting the settlement’s development and filled with tools and artefacts, the highlight is arguably the close-up view of the settlement from the top floor of the farmhouse. We even ended up having a picture taken wearing the traditional conical hats – although we didn’t purchase the photo, we were given a wallet-sized copy for free.

Once we’d had our fill of the museum, we made our way downstairs and explored the temple. After admiring the ornate temple hall and checking out the other rooms – one of which was complete with a roaring fire, which seemed absurd given the heat – we headed outside to check out the temple’s bell tower. 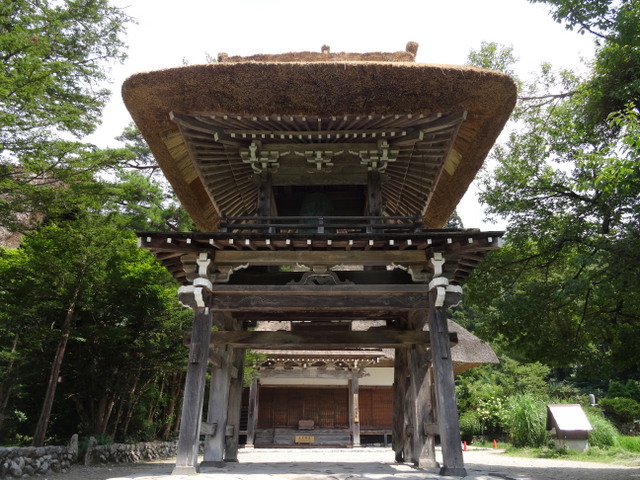 We spent much of the afternoon strolling round the paddy fields, soaking up the sun and admiring the surroundings. I particularly liked this isolated gasshō-zukuri farmhouse which was surrounded by lush green paddy fields. 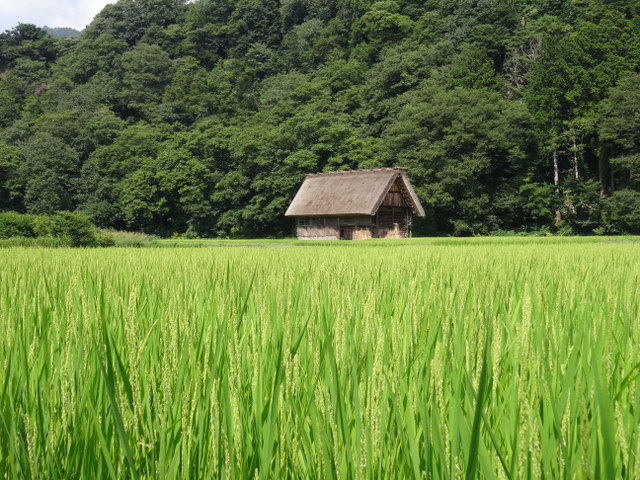 Pottering around the village we stopped in a number of souvenir shops (and made a couple of purchases, though not of the items in the pictures!) before hunting down a pot of lemon-flavoured shaved ice. 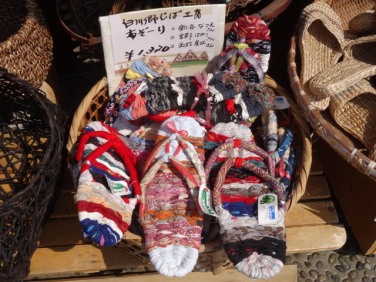 Whilst inevitably catering to the demands of tourism, its status as a UNESCO world heritage site has arguably helped protect Shirakawa-go from becoming a tourist mecca; authentic restoration techniques are used and strict rules are in place to prevent the development of infrastructure which might damage the historic, cultural and natural environment of Shirakawa-go.

8 thoughts on “Stepping Back in Time in Shirakawa-go”