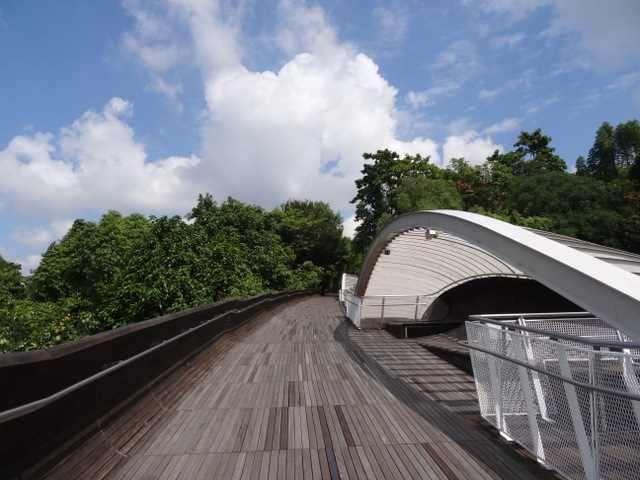 When it comes to green spaces, Singapore has it all – rooftop gardens, sprawling parks and nature reserves – and, what’s more, you don’t have to travel far to reach them. In the 1960s, then-PM Lee Kuan Yew set the wheels in motion for Singapore to become a Garden City. Singapore’s status as a Garden City, or a City in a Garden, owes as much to this man’s vision as it does to the nation’s collective support for his project.

Greenery is shifted from ground to sky, seamlessly woven into the fabric of this futuristic metropolis; Gardens by the Bay’s Supertree Grove epitomises this green philosophy. Tropical forests thrive on the outskirts of the centre, bringing locals and visitors alike face to face with the city state’s flora and fauna. Southern Ridges encompasses forests, landscaped parks and futuristic bridges, and is an easy half-day hike for those wishing to escape the bustling city centre.

After breakfast (a large iced lemon tea for me, and a plateful of kaya toast washed down with a hot milk tea for Laurence), we caught the MRT to Pasir Panjang. From there, it was just a short walk up Pepys Road to Kent Ridge Park. Canopy Walk was unfortunately closed for maintenance, so we snapped a couple of photos and strode off in the direction of HortPark. 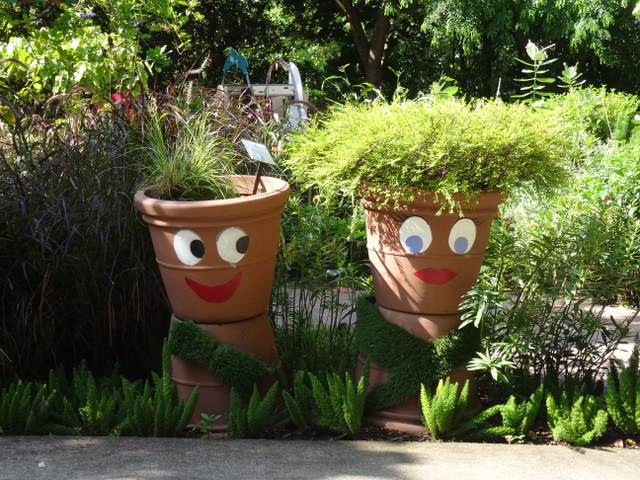 Horticulture-themed HortPark comprised lots of little gardens, each filled with sculptures and beautiful flowers. Mr Potter and Mrs VainPot, designed from recycled pots and gardening material, were two such sculptures; I couldn’t help but giggle at the turf bow-tie and scarf which had been draped around them.

Orchids bloomed to one side of the main path; nearby, a fetching scarecrow stood in the vegetable garden. (A scarecrow would certainly make for a more attractive pest deterrent than the blue slug pellets sprinkled around my own vegetable planters, though it probably wouldn’t be quite so effective.)

Continuing on, we reached Forest Walk. This treetop walkway cuts through the adinandra belukar (a secondary forest which regenerates after extensive agricultural exploitation) which carpets Telok Blangah Hill, providing visitors with a bird’s eye view of the canopy and surrounding flora. We didn’t see any of the resident monkeys, though signs did warn us of their presence at regular intervals.

Forest Walk connects with Henderson Waves, a striking bridge which connects Telok Blangah Hill Park with Mount Faber Park. By day, it’s sleek timber decking edged with the white crests of waves about to break; come dusk, illuminated by LEDs, it looks more like a golden slinky suspended in the sky.

Henderson Waves feeds into Mount Faber Park, a hilltop which commands clear views towards the CBD and across the Singapore Strait, fringed with lush greenery. We paused briefly to take in the views, before picking up the Marang Trail which would lead us down to HarbourFront MRT.

Singapore Botanic Gardens was next on our agenda, and when we arrived at Botanic Gardens MRT we followed our noses across the road towards Adam Road Food Centre in search of lunch. I opted for roast duck with rice (a snip at only SGD$3.50) while Laurence had carrot cake (not the sweet variety) and a veggie platter.

Fuelled up, we entered Singapore Botanic Gardens, the only tropical botanic garden to be classed as a UNESCO World Heritage Site. Established in 1859, Singapore Botanic Gardens has long served as a regional hub for horticultural research and conservation. It is perhaps best known for two things: the introduction of pará rubber (a crop which would transform the region) and the development of new orchid breeding and hybridisation techniques.

We began with a wander through the Trellis Garden, pausing for photos by the colourful bougainvilleas which bloomed nearby. Looping round Eco-Lake, Laurence spotted a hefty lizard on the prowl, its beady eyes scanning the fallen leaves for food.

Featuring both terrestrial and aquatic plants, the Foliage Garden is a fairly new addition to Singapore Botanic Garden’s collection of themed gardens. It feels like a tiny pocket of jungle in an otherwise heavily landscaped garden, due to the dense greenery and trees towering above the path. A little further on we came to the Fragrant Garden, which gets its name from the plants within it which give off delicate scents in the early evening (and cause a sneezing attack for hayfever-afflicted visitors). The nearby Healing Garden feels more like a hidden retreat than a landscaped garden, with medicinal plants laid out according to the various parts of the body they are used to treat.

Moving on, we came to the National Orchid Garden, which showcases over 1,000 different species of orchid and some 2,000 hybrids, making it the largest display of orchids in the world. Singapore has a long history of naming orchids after foreign dignitaries who have visited the country, and the VIP Orchid Garden features orchids named after Barack and Michelle Obama, the Duke and Duchess of Cambridge and Angela Merkel, amongst others.

With the afternoon slipping by, we scouted out one last ice cream sandwich from a vendor on Orchard Road, before making our way to Maxwell’s Food Court for an early tea. We’d hoped to catch ‘Garden Rhapsody’ one last time, but it wasn’t to be as the heavens opened, it began to pour and the show was swiftly cancelled before it had even begun. Consequently, we decided to dry off in Toast Box and then head over to the airport. Unfortunately, T4 was a bit light on fun things to do while killing time before a (very) late-night flight, though we enjoyed a potter round the Peranakan Gallery.

2 thoughts on “Southern Ridges, Lizards and Orchids: So Long, Singapore”