Once upon a time, Ostia was a thriving port city with over fifty thousand inhabitants and a buzzing social scene (a theatre, plus public baths and taverns aplenty). Over time, attention shifted to Portus – a harbour on the north of the River Tiber – and Civitavecchia – a city sixty-odd kilometres to the north-west of Rome. Trade in Ostia slowed, and the city fell into decline.

Buried beneath layer upon layer of silt, Ostia faded from memory. Centuries later, excavations revealed this long-lost city, relic by relic. I thought Ostia Antica would keep us entertained for a couple of hours at most. I couldn’t have been more wrong. We spent nigh-on five hours wandering amongst the ruins, exploring all the nooks and crannies – and stroking a few of the resident felines. 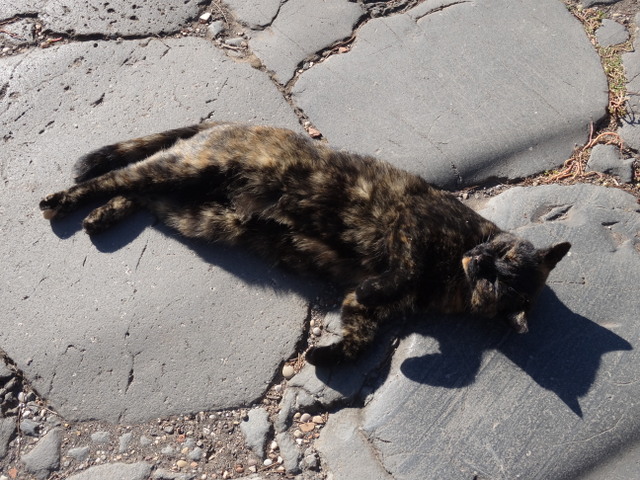 We enter through Porta Romana. Ostia Antica sprawls before us: centuries of history unspool in front of us. Decumanus Maximus – the main thoroughfare – pulls us towards the centre. Buildings from the Roman Republic (509 BC to 27 BC) and Roman Empire (27 BC to 476 AD) sit side-by-side, impeccably preserved. Whenever we spy a flight of stairs, we clamber up for an aerial view of the site. 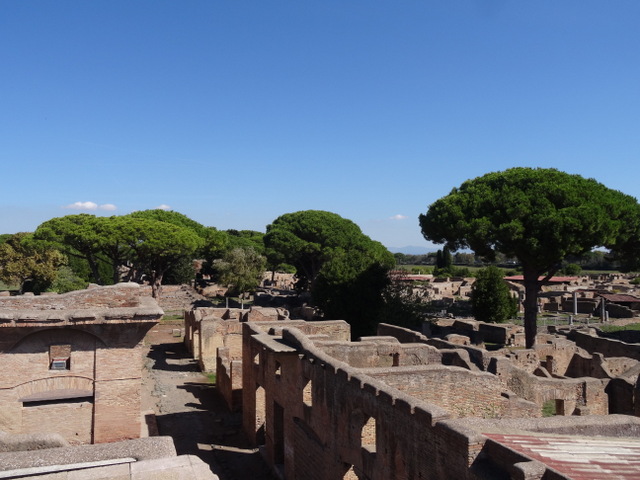 Scattered across the site are faded frescoes and monochrome mosaics, all creatures great and small depicted in tiny white and black tiles.

We pass rows of brick warehouses, open to the sky. Ostia Antica is large enough that – in shoulder season, at least – you can go a fair while without bumping into another visitor. Guided tours were of the whistle-stop variety; if you want to potter round, as we did, and explore the site at a leisurely pace, I’d recommend steering well clear of organised tours.

Further along Decumanus Maximus lies the amphitheatre, which hosts open-air concerts in the summer months. We sit on the terraces for a while, taking in the leafy views. I still can’t get my head around how expansive the site is, how well preserved.

I found these little stone heads, propped up on a wall alongside the amphitheatre, rather comical. 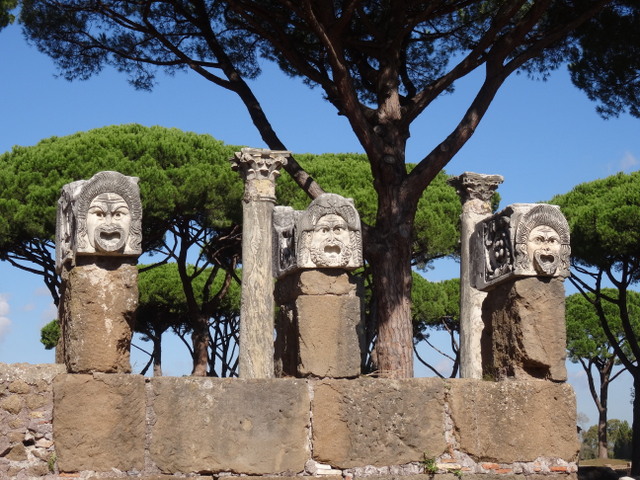 We loop round the public baths, stumble upon the communal bogs round the corner. (The idea of taking a dump in company fills me with more horror than a squat toilet – and that’s saying something. I’m rather glad that element of Roman society hasn’t stuck.) 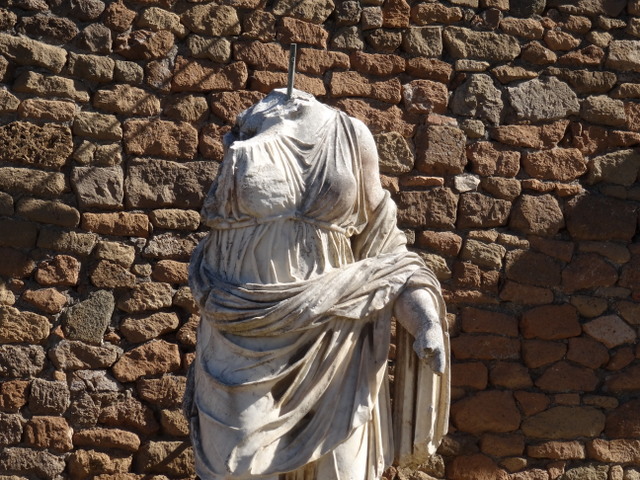 We swing by the café and share a drink – it’s a warm day and there’s not much shade on the site – before continuing towards the forum, passing multi-storey residential blocks en route.

Every so often, information plaques tell us the stories behind the buildings: which held shops, inns and taverns; which served as places of worship (there were no fewer than eighteen temples dedicated to Mithras); which housed the rich and the poor. If you’re so inclined, audio guides with more information are available.

If you’ve got more than a couple of days in Rome, I’d highly recommend venturing out to Ostia Antica.

4 thoughts on “An Armchair Tour of an Archaeological Gem: Ostia Antica”