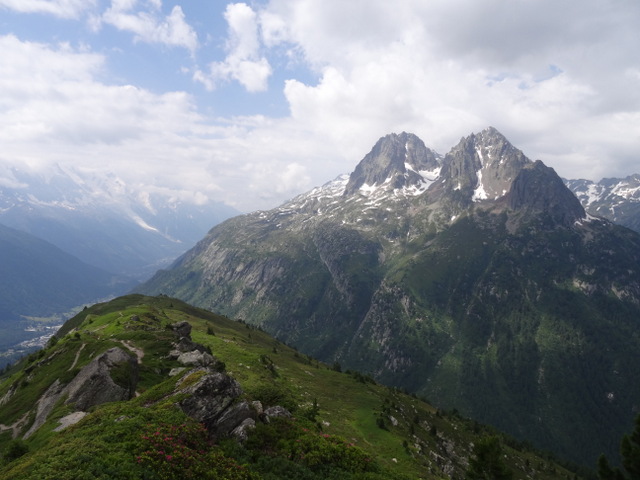 The early bird catches the worm – or, in our case, the lift up the hill to rejoin the route at Col de la Forclaz. We’d had to veer off the route the previous day, as all the auberges and refuges around Trient were fully booked, so when our host said he could drop us at the top of Col de la Forclaz on his way to work we gratefully took him up on the offer. We chat about this and that – the lack of sunlight in winter; how Facebook newsfeeds overflow with GIFs and the like – on the short drive up the hill and part ways at the top.

On today’s breakfast menu: slightly squashed (but nonetheless tasty) chocolate chip pains au lait from our rucksacks, eaten on-the-go. Trient is teeny-weeny: a smattering of chalets and a pink church encircled by firs, with a population of just a hundred and sixty-one. To put that into perspective, despite Trient occupying a similar amount of space to Cambridge (39.5km² to Cambridge’s 40.7km²) its population is just 0.13% of Cambridge’s.

We pass La Peuty: campers are up and about, breakfasting and disassembling tents; a handful of walkers are lacing up boots, raring to go. We press on. Col de Balme (2,191m) is only a couple of hours’ walk away – switchbacks through forest to begin with, followed by a steady ramble up the hillside to the refuge which marks the Franco-Swiss border.

By the time we reach the top the clouds have cleared to reveal the Chamonix Valley and the Aiguilles Rouges. We stop for elevenses – caffeine in different guises (café au lait for Laurence; Coke for me) and crisps – at Refuge du Col de Balme. There are some familiar faces at the picnic tables, including the friendly couple from Ohio and the seriously loud snorer from La Fouly. We layer up – it’s a little breezy at the top – and linger for a while at Col de Balme, enjoying the views.

We set off. Barely two hundred metres into our descent, I’m struck by cramp in my left foot and have to sit down by the path and wait for it to pass (which it does, albeit S.L.O.W.L.Y). We’re on the move again about fifteen minutes later, wiggling down the slope towards Col des Posettes.

Ahead: Aiguillette des Posettes. We clamber up and follow the path along the ridge, relieved it’s not raining (smooth rock plus rain wouldn’t be a good combo, to say the least). While the ascent is fairly steady, the descent is beastly on the knees. I don’t know how trail runners weather the steep descents!

Tré-le-Champ’s two auberges (Auberge la Boerne and Gîte le Moulin) were already fully booked when we planned our route, so once again we were going off-piste, this time into Argentière. Luckily, there’s a small footpath which connects the two villages, so we can avoid the busy road into the valley. Ominous clouds are gathering overhead; it’s just as well we had an early start.

First stop: Le Fournil Chamoniard and Marché U, for a gourmet picnic (#priorities). We bought a baguette and fruit tarts from the boulangerie and ham, peaches, yogurts (I highly recommend Mamie Nova’s lychee/rose and mandarin/lime flavours) and crisps from the supermarket. Several bites into our ham baguettes, the heavens open: a few drops of rain at first, then buckets. We relocate to a bench behind the supermarket which overlooks the car park. Entertainment soon materialises in the shape of an elderly woman who forgets to apply the handbrake and promptly rolls into the car in front. She parks and strolls off, clearly nonplussed.

Energy levels restored (though by no means on par with those of the Duracell Bunny), we spend the afternoon wandering round Argentière. With its whitewashed exterior, Église d’Argentière looks fairly nondescript. Step inside and you’ll quickly realise that’s not the case: there’s an awful lot of gold on the altarpiece in this baroque church, and a rather nice organ to boot.

Since we can’t check in to our accommodation until five ‘o’ clock, we while away a couple of (rainy) hours in The Office Bar. The two Canadians we’d met in Champex-Lac spot us and come over to say hello; they were planning to walk to Chamonix, but are tempted by the train as the weather’s gone rather grim.

We freshen up at the hotel: I have a lukewarm shower; Laurence a cold one. (Not out of choice, I hasten to add: the hot water supply was, shall we say, unexpectedly limited.) Later, we pull on our waterproofs and head out for pizza at Stone Bar (via the supermarket for supplies for tomorrow). We polish off a ‘Funghi’ and a ‘Tonga’ (chorizo, pineapple, peppers) between us and, for once, I’m too stuffed to contemplate having a pud.