I’ve been a fan of The Great British Bake Off for years and while I’m not quite sold on the new judging line-up, I still can’t resist tuning in to see the latest batch of bakers demonstrate their baking prowess under the watchful (and piercing) eyes of Paul and Prue. This year, Laurence and I decided to ‘bake along’ and attempt a challenge each week – so today’s post is a run-down of what we made and how our bakes turned out.

Biscuits took centre stage in the first week: a regional signature bake was first up; followed by a wheelie challenging technical bake in the form of a packed-lunch staple, wagon wheels; and a selfie-showstopper to round off the first week in the tent. We mixed and matched recipes for this one, using Paul’s biscuit recipe, our own homemade blackberry jam and a marshmallow recipe from Kitchen Frau (which crucially didn’t require a sugar thermometer). Taken individually, the components were fairly straightforward – but when it came to sandwiching the lot together, we ended up in a very sticky, jammy, chocolatey mess! On the upside, they tasted great (and a hell of a lot better than the shop-bought ones). 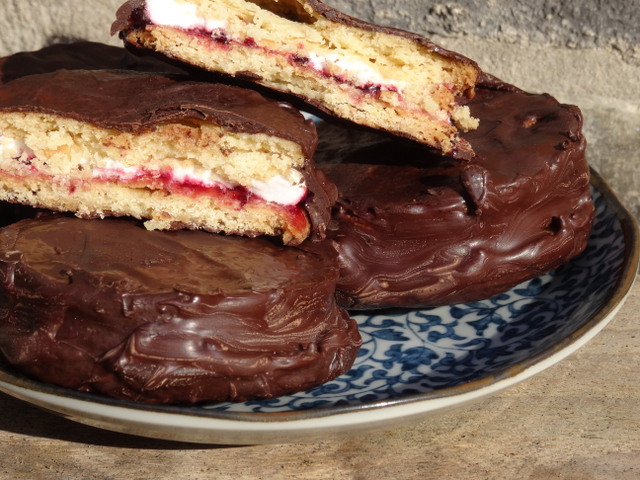 Noel Fielding dressed as Marie Antoinette meant only one thing: cake week. There were scrumptious-looking signature traybakes, garish gâteaux verts and extravagant chocolate-collared showstoppers. We gave the marzipan-heavy technical bake a miss, and opted for a head-to-head traybake challenge. I baked my favourite carrot cake with spiced mascarpone frosting, while Laurence whipped up a chocolate chiffon cake with a creamy cherry topping and a sprinkling of matcha.

Look at almost any of the bakers’ faces on bread week, and you’d conclude it’s a pain-ful episode for them. Paul and Prue tasked the bakers with creating Chelsea buns with a twist, non-yeasted garlic naans (crafty!) and a tiered korovai. Time for some Chelsea bun fun, we decided. I’d never baked these before, and was pleasantly surprised by how easy they were to make (patience pays off big time with these beauties). For the dough, we followed the recipe for ‘Sticky Honey Cinnamon Buns’ in The Great British Bake Off: Big Book of Baking. For the filling, we melted 100g butter and stirred in 100g sugar and 4 tablespoons honey. We spread this over the dough, sprinkled cinnamon and diced apple on top, and rolled it up. Top tip: if you don’t have a proving drawer (which, let’s face it, most of us don’t), cover your buns with clingfilm and pop them in a warm place to prove.

At last, dessert week: a week dedicated to my favourite course of any meal (yes, I’m that person who eyes up the puddings before selecting a main). In the tent, the bakers rolled up roulades, tackled a retro technical (blancmange) and created showstopping chocolate balls (Kim-Joy’s space turtles were out of this world, pun intended). We set our sights on a banoffee roulade, using the pavlova recipe from Delia’s Complete Cookery Course (upping the quantities slightly) and our own recipes for a caramel and yogurt-cream filling. Once the meringue had baked and cooled slightly, we spread the yogurt-cream on it, swirled in some caramel and rolled it up. We then topped the roulade with the remaining yogurt cream, a drizzle of caramel and freshly sliced banana. (We saved the leftover caramel for mini banoffee pies later in the week.)

Paul and Prue turned up the heat (pun intended) in Bake Off’s first ever spice week, and had the bakers whipping up ginger cakes (some whimsical, others booze-infused), maamoul (Middle Eastern biscuits for the uninitiated) and elegant biscuit chandeliers. Being the cake fans that we are, we gave the ginger cake a go, and boy was it tasty. We followed the ‘Sticky Gingerbread Cake’ recipe in The Great British Bake Off: Big Book of Baking and, following the method to the letter, left the cake alone for two days so that it would develop its characteristic stickiness (that was probably the hardest part of the recipe, if the truth be told!).

If ever a baker didn’t know their choux from their shortcrust or their flaky from their filo, it’s safe to say pastry week would spell disaster for them. Paul and Prue set a sweet and savoury samosa signature, bewildered almost everyone with Prue’s puits d’amour technical and tasked the contestants with creating pies fit for a royal feast. We had a few veggies to use up, so decided to make some jerk chicken samosas with diced carrot, potato, onion and pepper. Since Rahul’s savoury samosas went down a treat with the judges, we followed his dough recipe and simply swapped in our own filling. Try as we might, creating neat little pastry pyramids was beyond us – though our slightly imperfect samosas were still super tasty (and that’s what counts, right?).

Out went the eggs, butter and other dairy products and in came coconut butter, aquafaba and soy milk. There were savoury tartlets to be made, pavlovas to be produced and cakes to be constructed – most of which received a stamp of approval from self-proclaimed vegan sceptic Paul. Although his Hawaiian shirts lived on, Jon unfortunately left the tent, meaning this week’s bake had to pass muster at work too (the office sweepstake dictates that when your contestant leaves, your bake ties in with the theme of that week’s episode). I’m much more at home with a sweet bake, so decided to go for a sweet tart instead of a savoury one. For the pastry, I swapped the margarine and eggs for dairy free spread and water, and (loosely) followed Jamie Oliver’s recipe for ‘Vegan Chocolate Tart with Rhubarb’ (minus the rhubarb, and with oat milk instead of soya milk). It took a few attempts to get the filling spot on (cornflour problems, need I say more?), but luckily I’d had the foresight not to add the chocolate until we’d got the milky-watery mixture lump-free. The end result was deliciously gooey, and you’d be hard pushed to tell it was vegan.

The Great British Bake Off’s first-ever Danish week saw plenty of drama: Scandi-lously seed-free smørrebrød (open sandwiches) from some bakers; bite-sized aebleskiver (spherical pancakes filled with apple and cinnamon); and birthday beheadings (I’m referring to the kagemand/kagekone, not the contestants themselves). We’re both partial to a homemade loaf, so rye bread was the obvious challenge for us to attempt (on the basis that we could then enjoy some rather tasty sandwiches over the weekend). Paul Hollywood’s own recipe was curiously seed-free, so we threw some in for good measure (30g each of sunflower and pumpkin seeds), left the dough to rise overnight and popped it in the oven when we woke up the next morning. It was a delightfully faff-free bake, and one I’ll definitely be making again.

Having bade Manon hej hej in the quarter-finals, Briony, Kim-Joy, Rahul and Ruby said bonjour to pâtisserie in the semis. Standing between them and a place in the final were madeleines (chocolate-dipped, no less), a devilishly tricky Sicilian torta setteveli (comprising layers of génoise sponge, sugar syrup, praline, hazelnut bavarois, chocolate mousse and a mirror glaze – phew, that was a mouthful!) and a windowful of choux, tarts and millefeuille (quite the bake-a-thon for the semi-finalists). Madeleines were, we felt, up our street and within our capabilities, and after researching the relative merits of chilling both the batter and the tin, we settled on this recipe from The Guardian (with a few tweaks, as we fancied incorporating lime zest into the batter). Shop-bought madeleines can be quite dense, but madeleines fait maison are delightfully airy and moreish.

Over the course of ten weeks, the original twelve were whittled down to three – Kim-Joy, Rahul and Ruby – but there could only be one winner. First up: iced doughnuts (six ring-shaped, six filled). Then, in a GBBO first, they went outside to rustle up pitta breads, in a technical that was arguably as much about campfire skills as it was about baking. For their final challenge, the bakers brought elaborate landscape desserts up to the gingham alter (Kim-Joy’s Lost City of Atlantis was a winner to me). Laurence fancied making doughnuts, so doughnuts it was. We followed Kim-Joy’s recipe, halving the quantities as we decided six would be more than enough. Making the dough was the easy part; it was the frying that drove us nuts (mostly due to the fact we don’t own a cooking thermometer, so judging when they were baked was essentially guesswork). We slathered ours in Nutella (what else?) and gave ourselves a gold star (or several) for our efforts.