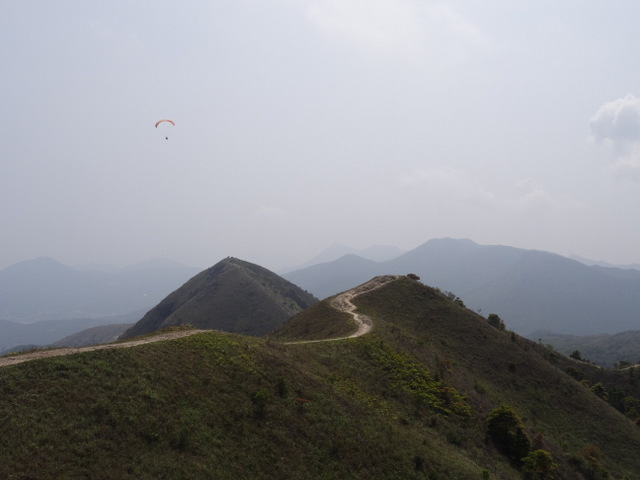 The Hunch Backs, or Ngau Ngak Shan to give it its local name, may have stellar views, but it isn’t a hike for the ill-equipped, and there’s definitely a reason (or two) why the signs mere steps from the starting line caution against proceeding.

We rose bright and early, caught the MRT to Wo Kai Sha and set off in the direction of the trailhead (a word I use in its loosest possible sense, for it was not of the variety we were familiar with). Taking our cue from the Hike Hong Kong trail directions, we stepped off the paving stones and onto a leaf-strewn verge which ran alongside a concrete conduit.

This trail isn’t maintained, and is little more than a dusty dirt track which climbs upwards steeply and traces the crest of the mountain. On the upside, even on steaming hot days, this part of the route is well-shaded. If you don’t have a head for heights, I’d strongly advise that you give this hike a miss: besides the gruelling ascent, the path teeters very close to the edge on more than one occasion and one poorly-judged step would see you tumbling down the mountainside.

If you, like we did, choose to plough on, you’ll quickly reach a point of no return: the only way is up, for turning back would involve sliding down the steep incline on your derrière (not really an option when creepy crawlies lurk beneath the leaves). Clay steps soon gave way to a steep slope; ropes had been tied to trees lining the trail, providing a handrail of sorts (though not one I’d want to put too much weight on, if the truth be told). 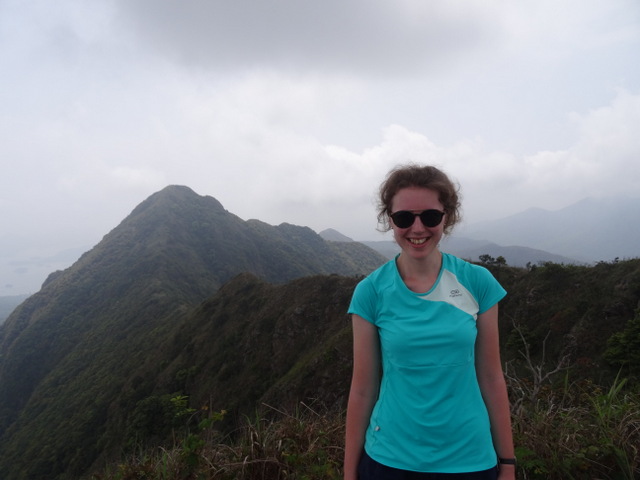 Two hours and three kilometres later (did I mention it was steep?!), we were at the top of Ngau Ngak Shan, chocolate biscuits in hand, looking down on Ma On Shan. We hadn’t seen anyone else tackling the near-vertical dirt path, and only spotted other hikers when other trails connected with the ridge later on.

With the toughest part of the hike done and dusted, we followed the ridge southwards, stopping every so often to take in the views. Normally, I’d be slightly dismayed by cloudy skies, but it was a blessing in disguise on this particular occasion. Had it been any hotter, we’d have run the risk of running out of water, despite carrying two litres of the stuff each!

Much like the ascent, the descent was fairly treacherous – partly due to the steepness of the slope, but mostly due to the fact there was nothing but the dusty rocks to cling on to as we shimmied down the path. Take it at anything faster than a snail’s pace and you’ll come a cropper, as Laurence did. That bump was enough to put his speed in check for the rest of the hike!

After descending Ma On Shan, we picked up the MacLehose Trail Section 4. Towards Pyramid Hill, known locally as Tai Kam Chung, we spotted paragliders swooping over Sai Kung. Pyramid Hill, so-called for its distinctive triangular profile, offers spectacular panoramas across Ma On Shan Country Park and the Sai Kung Peninsula.

We followed the Ma On Shan Country Trail down into Pak Kong Au, winding our way down the hillside until we reached Sai Kung. We’d only had a fleeting glimpse of Sai Kung on our previous trip, having spent the day out at Long Ke Wan, so decided to explore the town as we had a little time in hand.

We ambled through the town, ice creams in hand, taking in the tiny temple just inland, the colourful junks anchored in the bay and the locals preparing for a festival of some description.

Seafood restaurants lined the promenade, each of them fronted by tanks filled with sea creatures: fish, crustaceans and cephalopods. Before calling it a day, we stopped off at Sai Kung Chung Kee Noodle for some much-needed cold drinks; many of the smaller eateries are cash-only, so don’t rely on plastic here.