It’s been a while since I last sat down and actually penned a bucket list – these days, mine tends to be more of a mental note – though had I done so prior to moving to Lyon, visiting Monet’s garden would have sat pretty high up on it. Naturally, when the opportunity arose to do so, I grabbed it by the horns. (I work on the basis that I don’t know when I’ll next be in the area, so if it’s feasible – in terms of both time and money – at that point in time, then I may as well go for it.) A quick scout around the Voyages SNCF website was all it took for me to confirm it was doable as a day trip sans tour guide, and armed with the logistical details and a Google Maps printout, we were off.

Gare St. Lazare is Paris’ second busiest metro station: a heaving mass of commuters and tourists, piling into and pouring off the metro in their hundreds. If you’re travelling with others, hold on tight – at rush hour, there’s a serious risk of becoming separated from your pals here! After an unforeseen kerfuffle with the ticket machine, we boarded the train to Vernon, the closest station to Giverny. From there, we transferred to the shuttle bus which drops visitors a short stroll away from the entrance to the gardens. As we had timed our arrival with the opening of the gardens, there was only a short queue – a relief after the monstrous queue at the Château de Versailles two days prior.

Blooms of all colours, shapes and sizes burst from the flower beds, splashes of colour amongst the green shoots and shrubs. Endearingly haphazard in style, the gardens were everything I had hoped for, and then some. 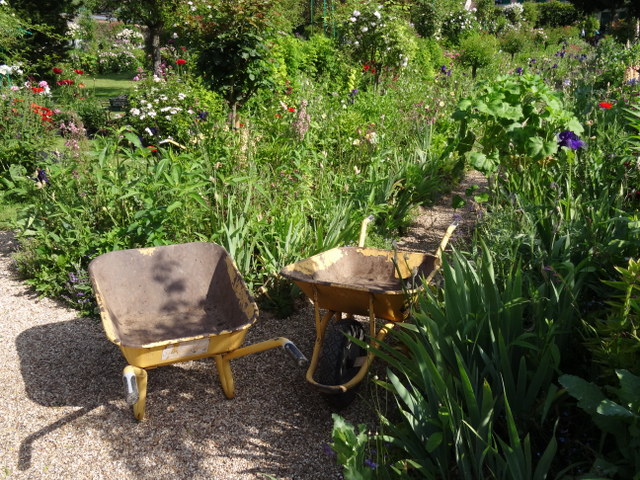 Inevitably, I couldn’t resist filling up my memory card with gladioli, irises, alliums, dahlias, poppies and sweet peas. (Could anyone?)

Arches were covered in climbing roses, tendrils creeping across the top towards the sun.

As more and more visitors began to descend on the Clos Normand, we made our way over to the Étang des Nymphéas, home to Monet’s famed water lilies. Gardeners in small boats plucked weeds out of the pond’s watery depths, piling them unceremoniously into buckets aboard their vessels. 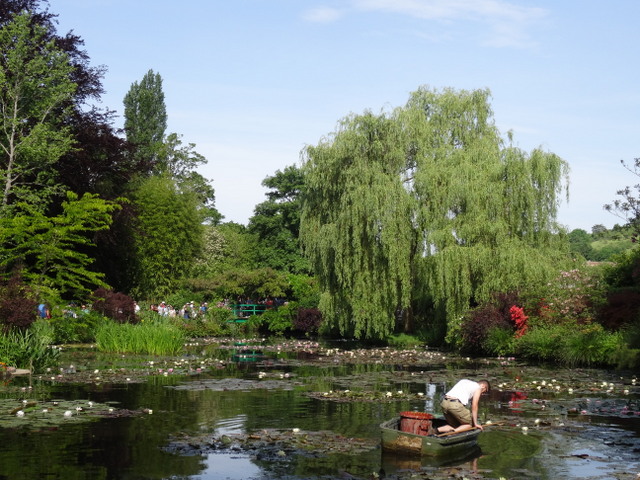 Water lilies, peaches and cream in colour, floated on the surface; so still was the water that the flowers reflected perfectly in it, looking like nature’s answer to pompoms. (On a side note, I love pompoms – the sort you make by winding yarn round cardboard circles cut from cereal boxes, not the fancy, fluffy sort sold as alternative Christmas decorations.)

After a couple of circuits of the ridiculously photogenic water lily pond, we returned to the Clos Normand. Although there were a fair number of visitors, a lot of them were on guided tours which seemed to be rather perfunctory in nature. As such, footfall was fairly free-flowing, and it rarely felt overly congested.

A short while later, we ventured into the house; the queue moved remarkably quickly, perhaps as most people just wanted a quick look inside before returning to the sunny gardens. Inside, it feels every bit the country abode – a little larger than your average chocolate-box cottage, due to a couple of extensions, but charming nonetheless.

Many of the furnishings are authentic, so it came as a surprise that visitors could potter through the house as they pleased, with none of the restrictions seen at National Trust or English Heritage properties here in the UK.

Satisfied that we had seen enough blooms to last our hayfever-stricken noses a lifetime, we decided to go for a wander round Giverny. We paused for a refreshing sorbet, before continuing on to the village church, where we visited Monet’s grave.

As it was such a sunny afternoon, we decided to walk the five kilometres back to Vernon. It took us about an hour, leaving us just enough time to pick up some food for a picnic lunch (featuring a very tasty smarties éclair) on the train back to Gare St. Lazare. The rest of the afternoon was then spent exploring the thirteenth and fourteenth arrondissements, taking in disused railway tracks, picture-perfect houses and street art galore.