The Téléphérique de l’Aiguille du Midi has been transporting visitors to the summit of one of the Mont Blanc massif’s highest peaks since 1955; for those with no mountaineering experience – myself included – it’s the closest you’ll get to the summit of Mont Blanc. At a dizzying height of 3,842m, the Aiguille du Midi commands stellar views of the Chamonix Valley, the Aiguilles Rouges and the Mont Blanc massif. It also serves as the gateway to the Vallée Blanche, a world-renowned off-piste ski route; the descent of almost three thousand metres over glaciers edged with seracs and riddled with crevasses is not one for the inexperienced.

Having been forewarned that large queues can develop for the Téléphérique de l’Aiguille du Midi, we made an early start. Despite this day supposedly having the best forecast – according to Google, the BBC and the local weather report – clouds hung over the mountains; not quite the weather we had in mind. Not long after we arrived, a steady trickle of tourists and off-piste skiers – armed with ice axes, crampons and dozens of carabiners – rolled up. (If you’re looking to ski the aforementioned Vallée Blanche, you’ll require a rather hefty pile of kit in order to do so safely; click here for more details.) As the world’s highest vertical ascent cable car, the Téléphérique de l’Aiguille du Midi is an incredible feat of engineering. Getting up at (quite literally) the crack of dawn meant we were on the first cable car of the day; at Plan de l’Aiguille (2,317m), we switched to a second cable car for the final stretch. Wisps of cloud swirled around the peaks; the jagged arêtes slipped in and out of view. 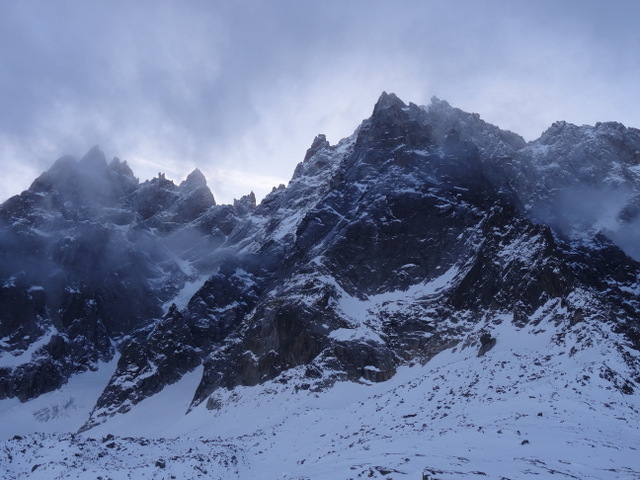 It was a nippy -13°C at the top – without taking wind chill into account – so we were glad that we had wrapped up warm! (That said, one of those wearable sleeping bags wouldn’t have gone a miss.) To reach the summit, we looped round the peak through the tubular walkway known as ‘Le Pipe’, before taking the lift to the very top. I’ve been fortunate enough to see some stunning landscapes, both close to home (e.g. Snowdonia) and further afield (e.g. Kamikōchi), and the glacial landscape viewed from the summit of the Aiguille du Midi certainly ranks amongst these.

The views of this alpine wilderness were breath-taking: vast pinnacles enveloped in cloud contrasted against the miniscule figures traversing the ice-crusted arêtes; crisp, untrodden snow smothered the mountaintops; mountains as far as the eye could see. The Alps truly are majestic. 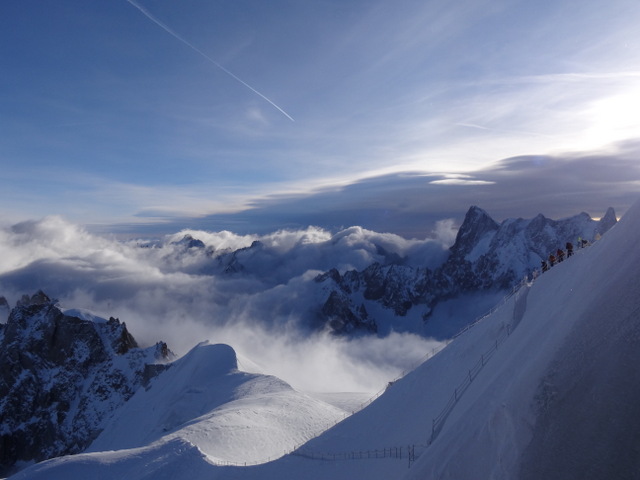 At the summit, we didn’t have to wait long to experience the Aiguille du Midi’s answer to Chicago’s ‘The Ledge’: ‘Le Pas dans le Vide’ (Step into the Void) is a glass cage set over a thousand metre vertical drop, with stunning views of Mont Blanc. The guys manning the attraction were almost as snap happy as we were!

A trip to the top doesn’t come cheap, so we intended to make the most of our visit. We sought out every viewing platform, explored the mountaineering exhibition and soaked up the views in the icy cold. 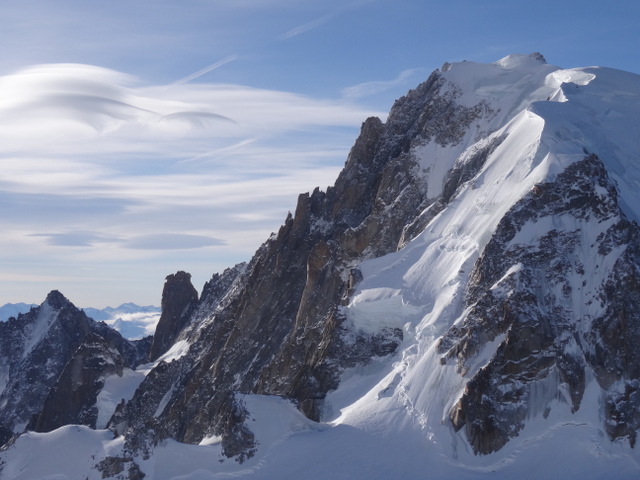 Unfortunately, forty minutes or so after arriving at the summit, thick cloud began to descend on the surrounding peaks. Mont Blanc disappeared from view; beneath us thick mist shrouded the crags below.

On the off chance it might pass, we decided to sit it out in the café with a hot chocolate. Eventually, we came to the conclusion that the clouds were there to stay. We took a short break at Plan de l’Aiguille, admiring the views of the Chamonix Valley. Child-like levels of excitement got the better of us and we had great fun stomping our way through the untouched snow around the cable car station.

Stomachs growling, we eventually resigned ourselves to catching the next cable car down to Chamonix to scout out some lunch. Ham baguettes (our DIY sandwich of choice) consumed, we decided follow the Petit Balcon Sud in a westerly direction, towards neighbouring resort Les Houches. By this time, the heavy cloud had lifted and we could see across the valley to the Aiguille du Midi, where we had frozen our butts off (despite the many layers) mere hours before. If the summit of the Aiguille du Midi looks eerily familiar to you, then cast you mind back to the release of Johnny English Reborn – ‘Le Bastion’, the Swiss fortress atop a remote peak which was featured in the closing scenes, was modelled on the Aiguille du Midi.

Dozens of paragliders swooped over the conifers, speedily descending to the valley floor.

Whichever direction you choose to hike along the Petit Balcon Sud, the views don’t disappoint. While the previous day’s hike to La Floria offered stellar views of the Aiguilles, this hike offered unobstructed views of Mont Blanc itself. Seeing as the weather had improved dramatically, we plonked ourselves down on a bench to soak up the view (and consume some Pringles). 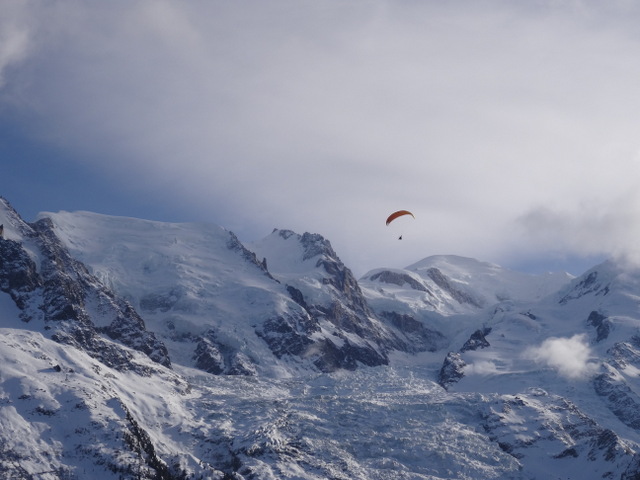 Retracing our footsteps to Chamonix, we saw the town centre had been taken over by stilt walkers and magicians. After a quick detour to Super U, we headed back to our cosy Airbnb for tea, promptly putting our pizza in the oven and only realising later that we had forgotten to remove the circle of cardboard beneath it. (Thank goodness it wasn’t a foam disc.) We chatted away to the other guests before making our way upstairs to pack up our belongings.

5 thoughts on “Atop the Aiguille du Midi”