According to Audrey Hepburn, Paris is always a good idea. I’m not so sure I agree with her, but on this occasion Paris was certainly a convenient idea. Back in October, as soon as the third week of classes was done and dusted, I whizzed up to Paris on the TGV to meet Laurence for a long weekend. Since Fridays consisted of a single translation class from 8-9:30am, I booked myself on the 10:04 TGV to Paris and motored to the station as fast as my legs could carry me – though as it turned out, I walked faster than anticipated and arrived before the platform had even been announced.

Pulling into the Gare de Lyon just after noon, I soon spotted “Le Train Bleu” – where the famous Mr Bean slurps his way through some shellfish in Mr Bean’s Holiday, and my not-so-famous (but lovely) family celebrated my uncle’s fortieth birthday several years ago – and headed outside to find Laurence. When I spotted his bright red coat in the throng of commuters and tourists, I ran down the slope with glee – I hadn’t seen him for six weeks, but I doubt that stopped strangers from thinking I looked like an over-excited infant!

From the Gare de Lyon, we set off on foot for the promenade plantée, which is also known as the coulée verte. Set atop the Viaduc des Arts, this landscaped, pedestrianised former railway line – which predates New York City’s High Line – passes through the 12th arrondissement. Bordered by gorgeous red brick buildings and grittier concrete blocks and bedecked with garden arches, trellises and water features, the promenade plantée offered a peaceful escape from the crowds. 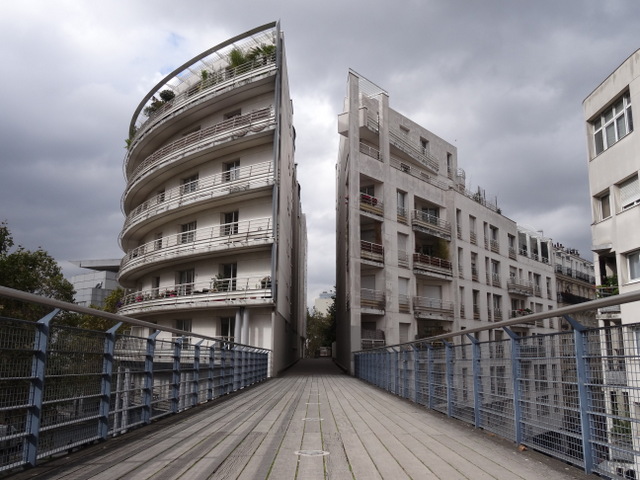 When we began to feel peckish, we picked up a jambon-beurre each from a nearby boulangerie (positively a snip at €2.90 apiece) and took them back up to the promenade plantée. The unassuming jambon-beurre – which in essence is a buttered ham baguette – seems to have become something of an institution in Paris, and Laurence’s pre-trip research largely centred on where we could enjoy a decent ham sandwich. Though we didn’t go to a Buzzfeed-approved locale, we felt that the boulangerie at 58 Avenue Daumesnil did just the trick. 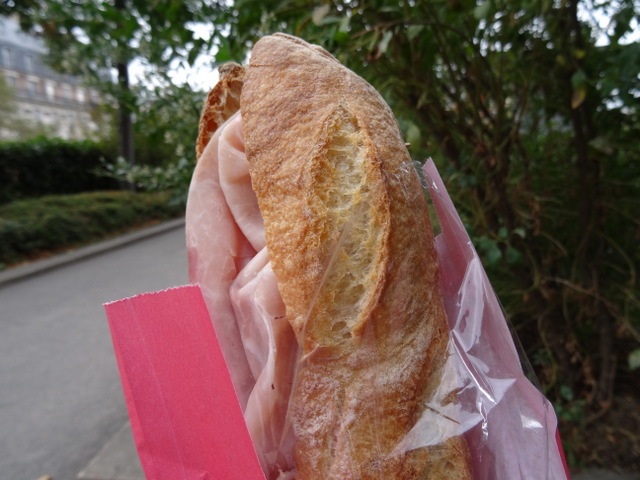 After devouring our baguettes, we wandered across Paris through Le Marais and Place des Vosges, a gorgeous little square lined with beautiful brick buildings, towards the Centre Georges Pompidou. Its eclectic architectural style isn’t really my cup of tea, but it was only a minor detour en route to Notre Dame. 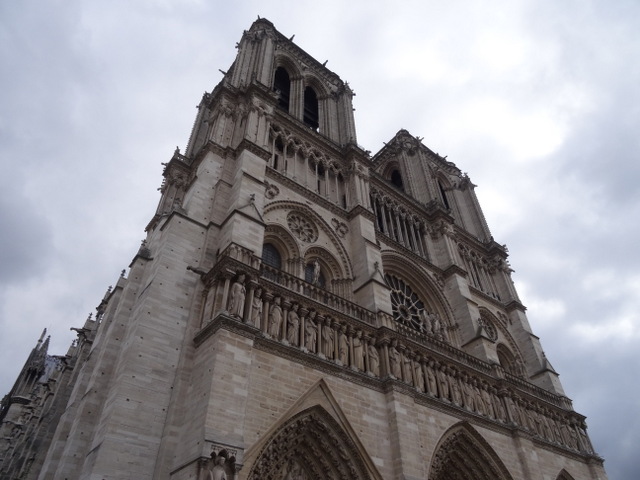 This medieval masterpiece was firmly on our itinerary from the off – and if you’ve got a penchant for aerial cityscapes it should be on yours too. Although the queue for the towers was fairly monstrous, being EU citizens netted us free entry so it was more than worth the forty-five minute wait. After clambering up almost four hundred steps, we were rewarded with an up-close view of France’s most famous gargoyles and a stunning panorama of the Parisian skyline; the Eiffel Tower, the Grande Arche of La Défense and Sacré-Cœur dominated the horizon. 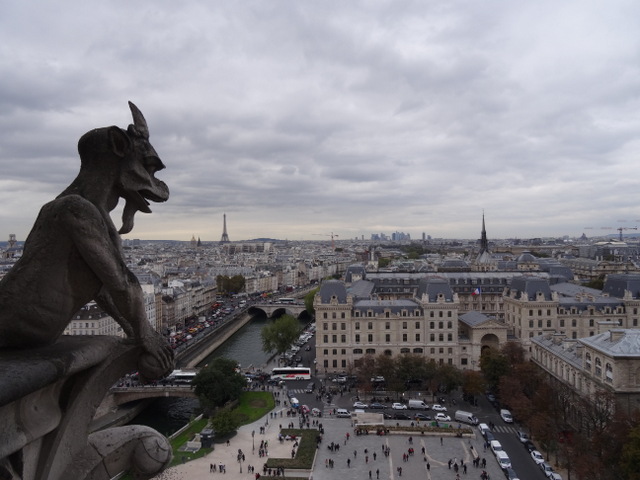 After descending the spiral staircase of Notre Dame, we crossed the Seine to take a look at Shakespeare & Co. and les bouquinistes, where dusty tomes, black-and-white postcards, vintage posters and other memorabilia spilled out of the collapsible stalls onto the pavement.

Time was marching on, so we decided to make our way towards the Arc de Triomphe on foot. Passing the Louvre, we continued along the Champs-Élysées until we reached Place Charles de Gaulle (historically the Place de l’Étoile), more commonly referred to as the multi-lane roundabout which inhibits people from snapping a traffic-free photo of the Arc de Triomphe. It took us rather longer than I care to admit to locate the underground passageway to the middle of the roundabout; once there we picked up free tickets (EU citizen perks) and went to join the queue for security. Initially they refused us entry as Laurence’s rucksack was a little on the large side, but after a few requests (in French) along the lines of “his bag’s practically empty, can he reorganise his things so it fits in the box” they let us up! They weren’t quite so accommodating with the couple with the fold-up buggy. Despite offering spectacular views of the Eiffel Tower, the Arc de Triomphe was – remarkably – fairly quiet at the top. All the better for us though, and we scored a prime viewing spot for the 8pm sparkle show. 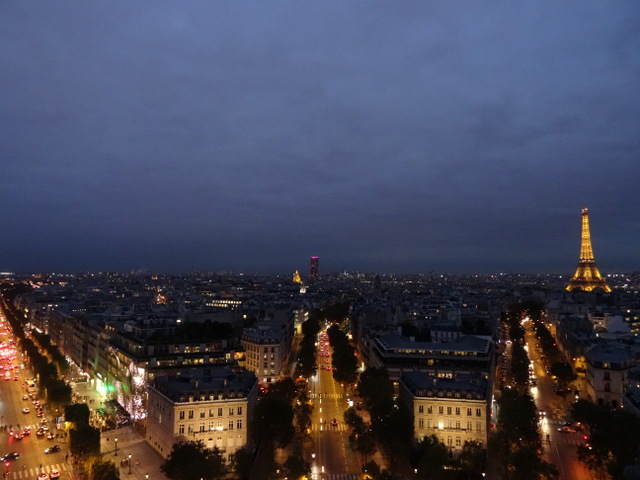 With tiredness (and hungriness) hitting us, we decided to head to our hotel and check in. We could have ridden the Metro 6 all the way to Place d’Italie, but in our sleepy state we accidentally ended up on the RER platform so had to change trains at Nation to get to our destination! After dropping our belongings at the hotel, we headed out to a nearby bistrot called La Manufacture for tea. Having expected smaller portions with a hefty Parisian price tag, we were both a little surprised when half a chicken and a mountain of chips turned up on each of our plates! Good things come to those who wear themselves out walking round Paris all day . . .

17 thoughts on “A Weekend in the City of Light”