It was at this point in our trip that Hermione’s Time-Turner would have come in handy: there was so much left to see, but time simply wasn’t on our side. (I’m now treating this as a bona fide reason to return, affordable flights permitting.) After a fruity breakfast of longan (similar to lychee), mango and dragon fruit we set off for Tai Wo to meet Laurence’s aunt for dim sum at Jade Garden. Being a Saturday, it was insanely busy (read: 70 people ahead of us in the queue) so we changed plans and headed elsewhere. Service was slow by Hong Kong standards, but the pineapple buns, barbeque buns, vegetable spring rolls and pan-fried dumplings were sufficiently tasty. All’s well that ends well, as the saying goes. We then wandered round Tai Wo’s market, picking up some fresh mangosteen to eat later. 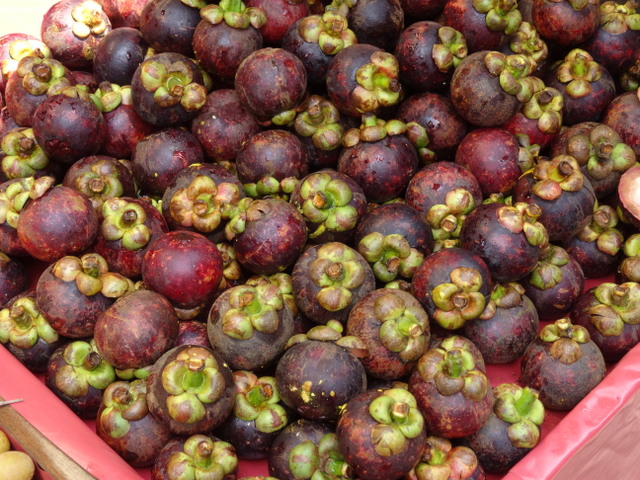 In the early afternoon, Laurence and I took the MTR to Diamond Hill to visit Nan Lian Garden. Clusters of towering apartment blocks surrounded the classically-landscaped garden; in the distance lay the mountains which separate Kowloon from the New Territories. On the day we visited, the sun wasn’t playing ball; it was overcast and intermittent downpours punctuated our visit. Casting aside the misbehaving current bun, we had a lovely time exploring the garden and its galleries. 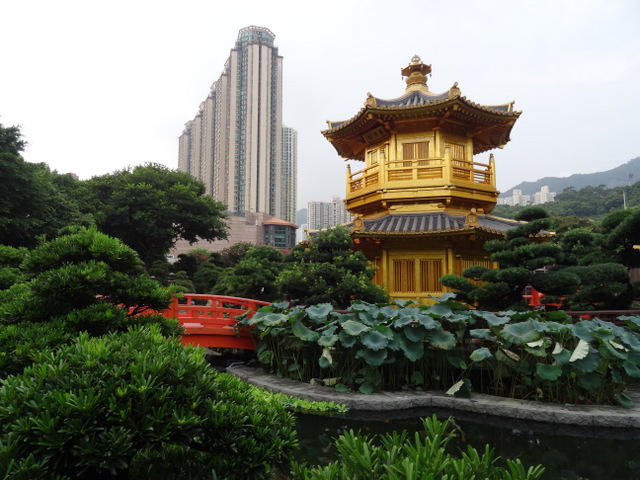 Our first port of call was the Chinese Timber Architecture Gallery, which was filled with intricate models of buildings from the Tang, Liao and Jin dynasties. We then made our way towards the Lotus Pond and the Pavilion of Absolute Perfection; the gleaming gold exterior was reminiscent of Kyoto’s Kinkaku-ji (Golden Pavilion). 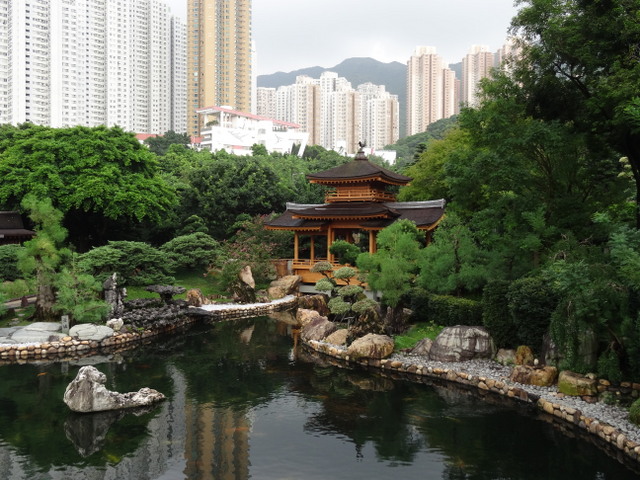 From the Lunar Reflection Terrace we had a good view of Pavilion Bridge (which, contrary to what its name may suggest, isn’t located next to the aforementioned pavilion) and the koi carp who were happily swimming about in the pond. After a brief spell of dry weather, the heavens opened; we took refuge in the shop while we waited for the rain to let up. When the skies cleared, we headed over to Chi Lin Nunnery; the halls were filled with sacred sculptures (photography prohibited), while bonsai trees were artfully arranged around the courtyard. 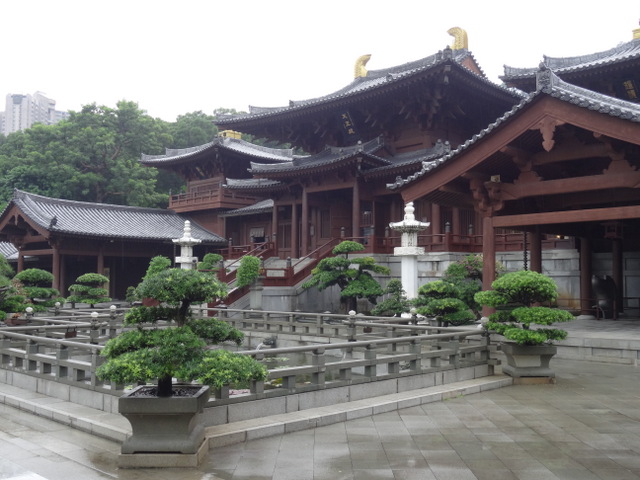 After a comprehensive wander round the complex, we returned to Diamond Hill MTR where we were due to meet up with Ryan, a family friend, at 16:30. Since we had a bit of time to spare, we browsed Uniqlo, where I bought my much-loved green sweater, and Taste, where I treated myself to a tube of lemon and lime mentos (amongst other Hong Kong culinary delights). When Ryan arrived, we headed over to the City University of Hong Kong – where Ryan spent a semester on exchange – for a drink; it was nice to have another catch up before we returned to the UK.

Our penultimate day (if it can be counted as that, seeing as the final day consisted solely of catching a flight) was spent in the New Territories. After a thorough read of the gov.uk website to determine which foodstuffs could be brought back to the UK, we set off to buy all manner of mysterious dried fruits, flours and teas on behalf of Laurence’s parents. The huge glass jars laden with curios were reminiscent of an old-fashioned sweet shop – only dried seahorses aren’t quite as appetising as sherbet pips, as far as my sweet tooth is concerned! 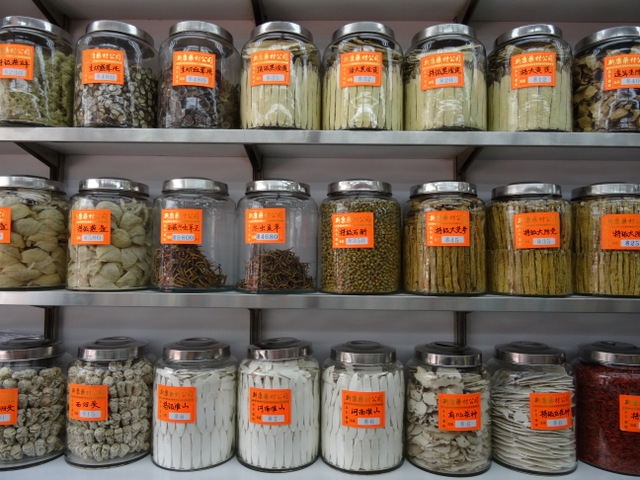 Purchases made, we spent the early afternoon squeezing packets of dried goji berries, apricot kernels, prunes, chrysanthemum tea and much more besides into our rucksacks, divvying up the items so each of our bags fell within the acceptable limits. Later that afternoon, having avoided the heat of the day, we caught the MTR to Sha Tin. Upon leaving the MTR station we got a wee bit lost, before finally spotting an inconspicuous sign pointing to the Ten Thousand Buddhas Monastery. Although the complex itself had already closed for the day – something we were fully aware of – we found the walk up to the entrance to be rewarding enough. Golden arhats (saints who have reached enlightenment) lined the path, striking poses which intensified in hilarity the further we climbed: first solemn, tubby arhats; then arhats pulling funny faces; finally culminating with arhats riding all of Noah’s animals. 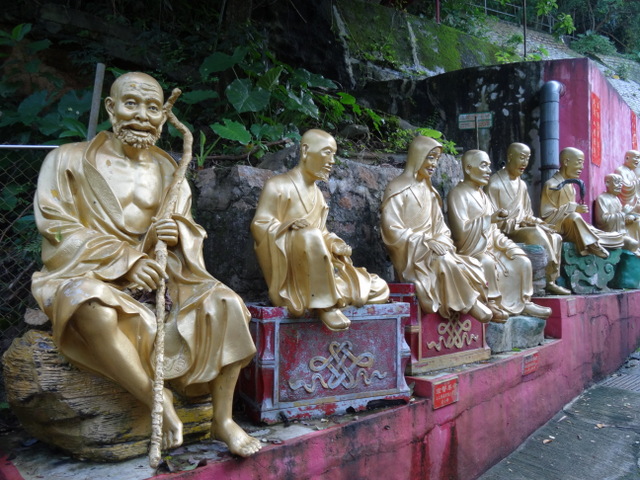 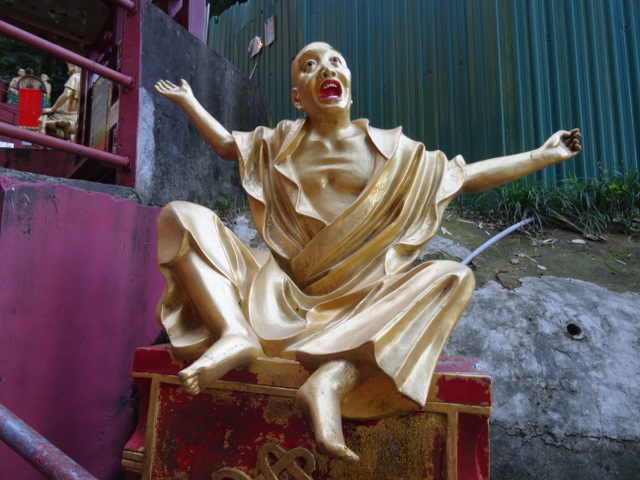 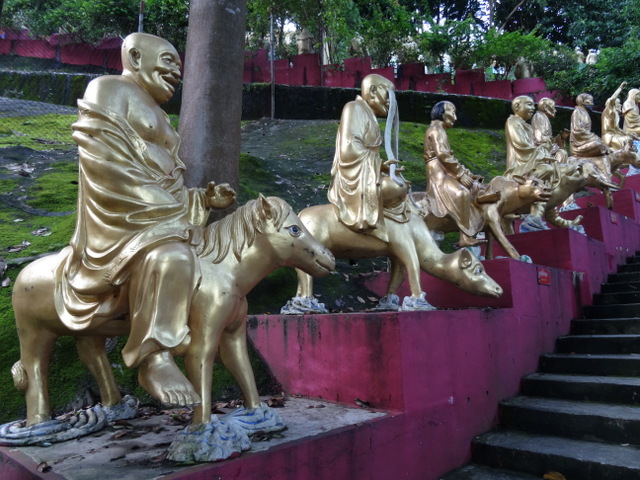 I could hardly contain my laughter as we made our way uphill! Incredibly, those we saw aren’t even included in the 10,000 – so when I make it back to Hong Kong, I’ll have to investigate the complex itself as it sounds like a sight to behold!

Statues admired and photographed, we headed back into Sha Tin as we were meeting a couple of Laurence’s family friends for tea at Lei Garden. After a delicious meal of braised chicken, cubes of roast pork, barbequed pork, mixed vegetables (and other plates which I didn’t try), we returned to Sheung Shui.

Surfacing early the next morning, we caught the 05:30 bus to the airport. Laurence’s gran came with us, so we stopped for a drink before checking in our luggage and going through security. I’d hoped to sleep on the flight, but my best laid plans quickly went awry as the lights never dimmed. I ended up watching Ratatouille, half of The Lobster (hands down the weirdest film I have ever seen), Extraction and The Intern and before we knew it we were flying over the fields of our homeland and touching down at Heathrow around 15:15. Factoring in the time difference, we had been up for eighteen hours already – so needless to say, we were absolutely shattered. Sadly for us, there was to be no rest just yet as we still had to catch the train up to Chester . . . which we had booked for 20:10, just in case the flight was delayed. With several hours to kill, we took the Piccadilly line to King’s Cross, plonked ourselves down at Nando’s and promptly fell into a food coma. Struggling to stay awake, we walked over to Euston, desperately hoping the fresh air would keep us from nodding off. By the time we finally arrived in Chester, we were feeling like zombies and headed straight to bed! 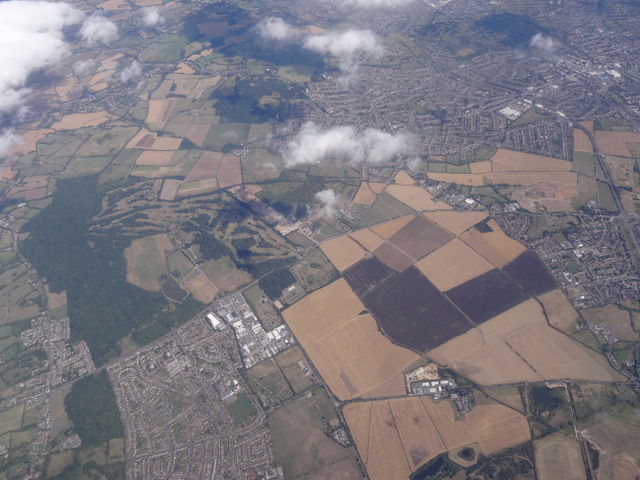 2 thoughts on “Until We Meet Again, Hong Kong”