Last weekend, the Fête des Lumières returned to Lyon: windowsills were illuminated with flickering candles in glass jars, the streets were bedecked with strings of festive lights (and lanterns!) and eclectic light-and-sound installations took over the façades of the city’s key landmarks.

Lyon’s renowned Fête des Lumières was – and at present remains – the cherry on top of the end of year celebrations. Not wanting to miss out, Laurence flew out to Lyon on the Friday morning. By day, we pottered around the various arrondissements and through the traboules; by night, we wandered the illuminated streets of Presqu’île and Vieux Lyon.

After fuelling up on fajitas and donning hats, scarves and gloves, we made our way over towards Place des Terreaux, passing under ‘Les Lanternes de Zigong’ en route. We caught the tail end of the installation, so whilst others followed the luminous arrows to the exit, we edged our way towards the centre of the square so we’d have a good view for the next showing. ‘Sans Dessus, Dessous’ (‘Upside Down’) centres around a mad scientist (whom we initially mistook for a Santa Claus-esque figure!), who controls climate and oceans, and an owl, which wreaks havoc with the scientist’s bonkers contraptions. It was a wacky, and somewhat endearing, allegorical animation reminding us of the need to look after our planet.

Heading south, we passed ‘Cocktail Party’ in Place St. Nizier – a lone neon tumbler which, jazzy as it was, looked as though it had lost its mates.

Continuing down Rue de Brest we soon arrived in Place des Jacobins, one of Lyon’s most picturesque squares with an intricate stone fountain at its centre. Said fountain was the centrepiece of the ‘Fontaine d’Étoiles’ projection: all colours of the rainbow flooded the fountain, bringing the fountain’s mermaids (or mermen!) and statues to life. Thanks to the different set-up and some patience on our part, we were able to stand right at the front and get an unobstructed view of the show.

Following the crowd, we found ourselves in Place des Célestins. ‘Coups de Cœur’ was an interactive installation, whereby people could queue up and use a console which would then display their pulse on the Théâtre Célestins behind the giant, glowing heart.

Looping down to Place Bellecour – the biggest square in Lyon and the largest pedestrianised square in Europe – we came face to face with a sea of light; ‘Un Songe Forain’, ‘Roboticom’ and ‘Off Lines’ were just a few of the many installations in this area. Place Bellecour’s Ferris wheel was the backdrop to ‘Un Songe Forain’, an installation which began as a whimsical fairground piece complete with hot air balloons, carousels and candyfloss before transporting viewers to the centre of this adrenaline-fuelled world at a dizzying speed.

After two viewings of ‘Un Songe Forain’, we wandered round the edge of Place Bellecour, taking in ‘Roboticom’ and ‘Off Lines’. The former, as its name suggests, was a robotic light display, whilst the latter – when green – made me think of minimalist Christmas trees.

Despite our best efforts to layer up (think thermals, multiple pairs of socks and tights under jeans), by 11pm we were feeling the cold. Since neither of us are mulled wine fans, we set off in search of a crêpe to warm ourselves up. Much to our amusement, the woman in charge of making ours appeared to have never made a crêpe before in her life – so we weren’t too surprised when the jam/ Nutella seeped out, leaving our faces and hands a sticky mess!

In Place de la République, we spotted ‘La Carpe Koï’ – a huge dragon, surrounded by lotus flowers and children riding koi carp. The vivid colours made this one of my favourite installations of the night! 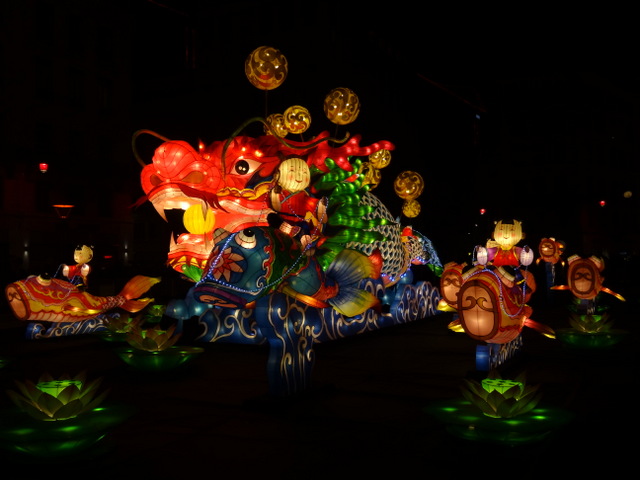 A little further up, we passed ‘La Bétonnière Boule à Facettes’ – a giant disco-ball cement mixer, which looked as wacky as it sounds. We then spotted a couple of ‘Expérimentations Étudiants’ in the garden of Église St. Bonaventure; these student-led installations were scattered across the city, and aimed to highlight future talent. No longer able to feel our tootsies we called it a night, eager to return for more the following evening.

On the Saturday night, we succeeded in procuring a map – I’m not sure how we missed them the previous night, but we were very grateful as it helped us locate a few extra installations! We kicked the night off with ‘Platonium’, located in the courtyard of the town hall, just off Place des Terreaux. Strands of luminous fabric were suspended from a frame, illuminated in hues of blue and pink; the installation was also reflected in a large mirror beneath the frame. This was another cracking installation, and one I’m glad we didn’t miss out! 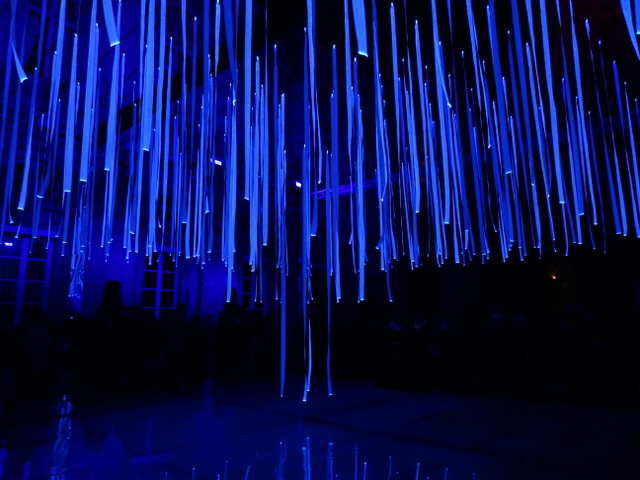 Wandering through les pentes de la Croix-Rousse – the slopes which link the Croix-Rousse to the heart of Presqu’île – we stumbled upon ‘Kiosk Night Fever’, a little structure bedecked with lanterns and luminous poles. After pausing briefly, we continued on to Place Sathonay to see ‘Un Piano Sous la Neige’ – whilst the illuminated pianist and his music were enjoyable, the snowstorm finale was the highlight of the installation for me! Before crossing the Saône to Vieux Lyon, we made one last stop in Place Rambaud. ‘Face’ was another interactive exhibit, which enabled viewers to project their face onto the installation – one woman was having a whale of a time sticking her tongue out and pulling faces, though we didn’t give it a shot ourselves.

Once across the Saône, we headed over to Gare St. Paul, where another light-and-sound animation was taking place. ‘Voyage’ was all about the passage of time, taking viewers from the Industrial Revolution to the Belle Époque and right through to the present day – even featuring silhouettes of major landmarks such as Tower Bridge and the Eiffel Tower. 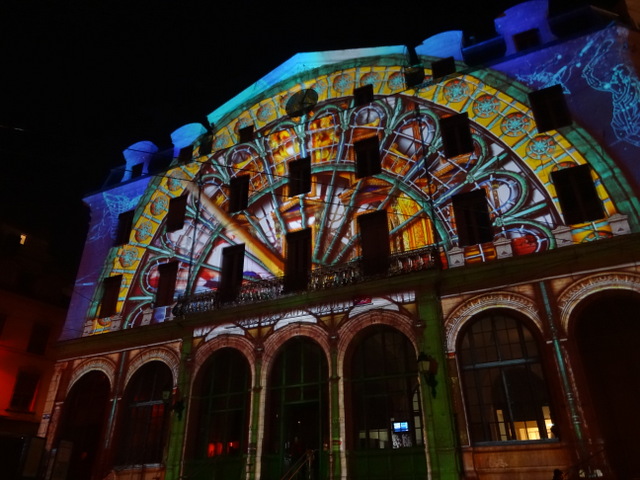 We’d seen dozens of installations – but ‘Évolutions’ over at Cathédrale St. Jean really stole the show. We ended up watching it three times – this was an installation that really utilised the contours of the building and it was absolutely mesmerising to watch (check it out on YouTube, it’ll be worth your time!) 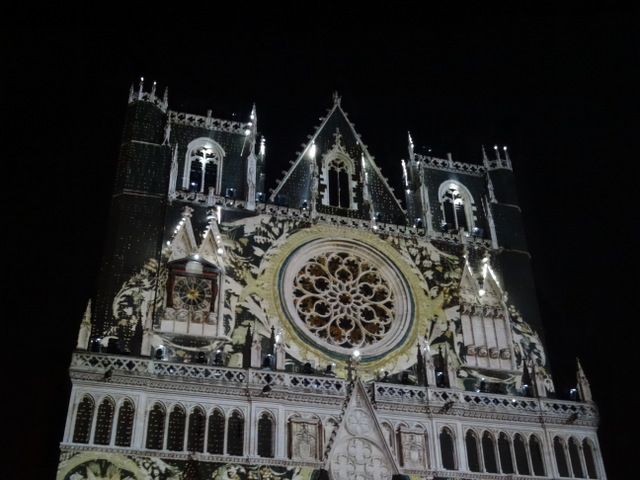 We then made our way up to Fourvière on foot, spotting ‘Ros’O’ from a distance. Located beside the Théâtres Antiques de Fourvière was ‘Les Lumignons du Coeur’, a figure of eight formed from thousands of candles. Developed in partnership with Électricians sans Frontières, an NGO which provides electricity to deprived communities, the display was created from the candles purchased by visitors at the stalls surrounding the Théâtres Antiques de Fourvière. We rounded the evening off with a viewing of ‘Incadescens’, a slower-paced animation which neither of us fully made sense of, before heading up to Fourvière itself for an aerial view of the illuminations.

Overall, we saw – either at close range or from a distance – 24 of the 41 illuminations. Even with two nights, it was simply impossible to see them all! If you fancy checking out more of the installations (accompanied with higher-quality images than mine!) check out the official website.