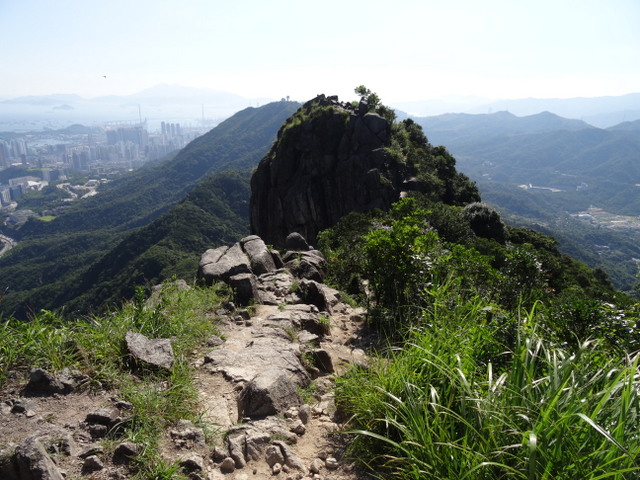 Lion Rock is by no means the highest peak in Hong Kong, but what it lacks in height it makes up for in stellar views of Kowloon, Hong Kong Island and the New Territories. Though the humidity had crept above 80% and the scorching sun was well over 30°C, this was one of my favourite days in Hong Kong – and the cheeky rhesus macaques weren’t the only reason why!

After a pre-breakfast fruit-fest of fresh lychees and kidney mangos, followed by noodles at Café de Coral (or in my case, another sweet raisin bun), we set off for Lion Rock. Whilst the MTR Mobile app was more often than not an invaluable resource (and I would highly recommend downloading it), on this occasion things didn’t quite work out according to plan. Arriving at Lok Fu – the app’s suggested MTR station for ascending Lion Rock – we were confronted with a) our inability to use minibuses, which essentially boiled down to the fact we had no idea how to get off them, nor which routes they took, and b) a self-proclaimed illiterate taxi driver, who claimed he couldn’t take us to where the minibuses drop people off for Lion Rock. Luckily for us, Ryan came to our rescue and sent us directions for the route he usually takes – so off we trotted back to the MTR.

From Tai Wai MTR, it was a swift twenty-minute walk to the entrance of Lion Rock Country Park. Upon entering the park, we were promptly greeted by a troop of rhesus macaques, complete with tiny infants. These boisterous inhabitants sprawled across the path, perched on rocks lining the path and swung about from the trees as though there was no tomorrow. 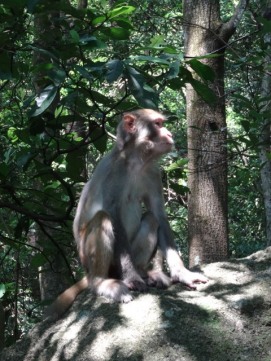 Leaving the macaques behind, we set off along the shaded, cobweb-lined path to the summit. For reference, refer to the tangled silvery mass of threads on the left of the picture above. Even though the path was relatively shaded, it was thirsty work and it wasn’t long before our 7-Eleven water bottles were being called into service! Before walking the last stretch to the summit, we stopped off at a sheltered viewpoint for a bite to eat. Most of the ascent is tree-lined and jungle-esque, so this was our first sight of Kowloon and Hong Kong Island from Lion Rock.

Atop the summit, the sun was scorching; by the time we reached the summit it was nearing 4pm, so I dread to think how hot it would feel up there around noon! Although we could feel our skin burning, we nevertheless decided to spend some time at the summit soaking in the panoramic views.

Skyscrapers stretched as far as the eye could see, seeping into the valleys and up the mountainsides. From 495m above the city, Hong Kong looked every bit the sprawling, urban metropolis.

Half an hour or so later  we were beginning to feel like roast human, if such a thing exists. Before embarking on the descent, we decided to climb up the other little peak to the west, as we weren’t entirely sure which one was the summit. Spoiler: there were no signs anyway, so we never found out.

Contrary to what Laurence’s face might suggest, by the time we made our way down we were both feeling the after-effects of the intense afternoon sun and were feeling acutely unsteady on our feet. We took this as a cue to have a well-earned rest (and a few slices of brioche) at the shelter, before continuing down the mountain.

On our descent we spotted a red-necked keelback, a rear-fanged venomous snake armed with lethal poison, slithering along a gully. Fortunately, it was contained in its gully and posed no threat to the small crowd of onlookers. 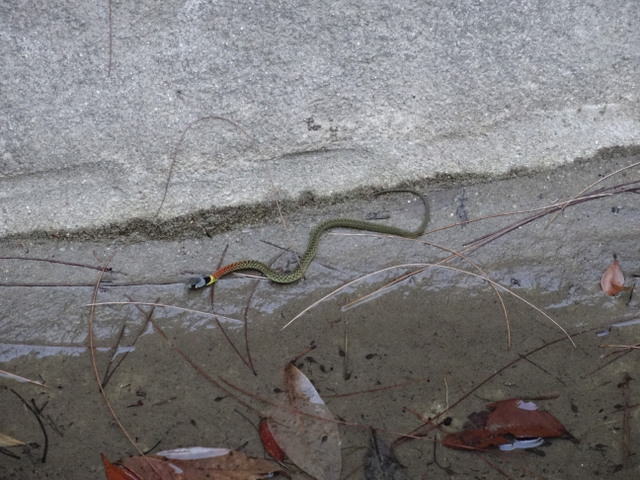 We then passed through macaque territory once more, before heading home for to fill our bellies with BBQ pork, steamed fish, vegetables and soup. Despite my general aversion to liquid food, I gave the tomato, carrot and mooli soup a try – though I’m by no means becoming a soup convert, I had to admit it was pretty tasty!

6 thoughts on “Humans vs. Humidity: Hiking in Hong Kong”