Whilst many prospective visitors may get the impression that Hong Kong is simply a maze of bustling streets, overcrowded tourist hotspots and seemingly endless skyscrapers, any Hong Kong veteran can tell you there’s another side to Hong Kong just waiting to be discovered: secluded beaches, hiking trails and adventures off the beaten track await those who take the time to find them. Luckily for me, I had three such people to show me what is often dubbed as “The Real Hong Kong”.

After a trip to Laurence’s favourite dai pai dong* with his gran and a tasty pai bao (sweet raisin bun) for me, the three of us wandered round Shek Wu Hui market in Sheung Shui. This experience was, both geographically and culturally, worlds away from a trip to Leeds’ Kirkgate Market: pungent durians decorated the fruit stalls; watermelons as big as footballs begged to be eaten; any animal part (trotters included) that could be consumed hung from butchers’ hooks; live fish splashed around in their tanks, trying to outswim their inevitable fate; and plump, live toads ribbited away in crowded cages.

Laurence and I then set off for Sai Kung, a seaside town in the eastern New Territories. Enter, Ryan – a family friend who, upon graduating, decided to make Hong Kong his home. After exchanging a few messages about potential spots to meet up, it was decided we’d spend the afternoon at one of Sai Kung’s many beaches. After a quick refuel, we took a taxi to Long Ke Wan – which, for the record, is not pronounced as its pinyin name might suggest (see ‘Tips’, below.) Located within Sai Kung East Country Park, and forming part of the Hong Kong Global Geopark of China, Long Ke Wan is an idyllic escape from the hectic pace of Hong Kong Island.

Half an hour or so later, we were dropped off at the East Dam, next to High Island Reservoir. From there, it was a twenty minute walk along the MacLehose Trail to reach Long Ke Wan. It wasn’t long before we caught sight of the sheltered inlet with its pristine sandy beach and aquamarine waters.

Full credit to Ryan for discovering this absolute gem – save for the party boats with their inflatable slides, this beach was devoid of the crowds and litter that permeate Hong Kong’s shores. Before long we’d left our stuff in a pile on the sand and headed into the water, where I proceeded to get thoroughly sunburnt. Laurence’s GoPro came into its own, and we had a great afternoon swimming around in the shallows with a whole host of little fish which none of us could catch on camera.

Truth be told, I use the word “swimming” loosely – we spent a lot of time just floating and chatting. However, when it comes to hot and humid climates less is most definitely more. As the afternoon wore on, the party boats left the bay; before we knew it, it was time to make a move ourselves. As we prepared to depart, a herd of wild cattle moved in to graze; one of them even plodded along the sands for a drink. 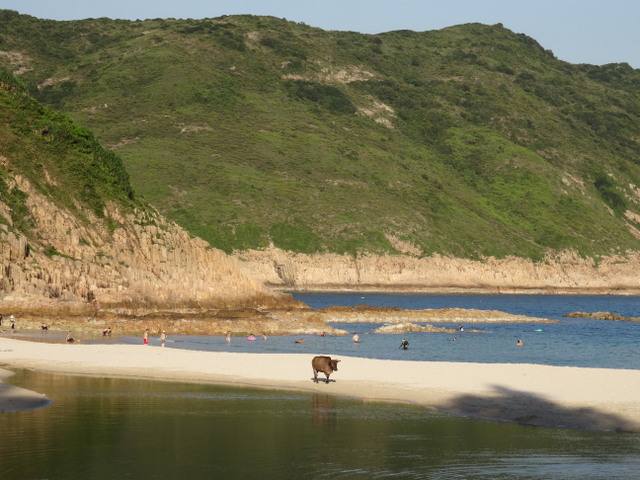 Making our way along the MacLehose trail, the setting sun gave the bay’s exposed cliffs a pinkish hue. 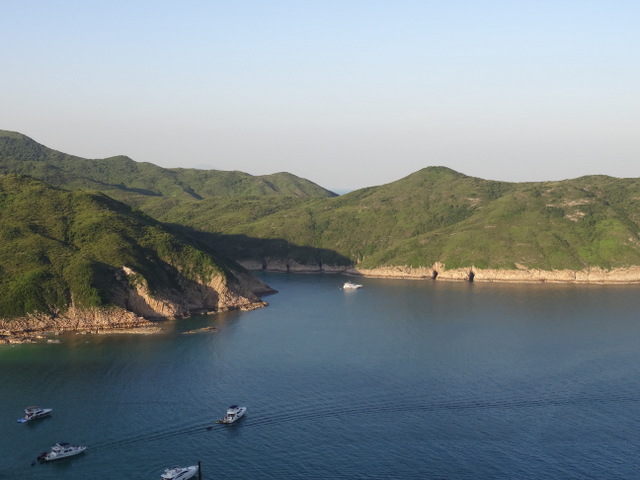 After encountering the biggest spider of my life so far (which by creepy crawly standards probably wasn’t even that big, but as far as I’m concerned a palm-sized spider is monstrous) we began to head downhill towards High Island Reservoir.

When we arrived, there was a rather large and disorganised queue for taxis back to Sai Kung. Eventually, an unreserved one came along and we hopped straight in! Back in Sai Kung we parted ways – Ryan to the minibuses that we didn’t know how to use, and us to the 299X bus to Sha Tin, followed by the MTR to Sheung Shui. Steamed chicken, fish, vegetables and endless kidney mangoes awaited us – délicieuse!

*Technically, the term dai pai dong refers to an open-air food stall holding what is known as a “big licence”, however the term is often applied to food stalls selling a variety of low-cost dishes irrespective of their location.

5 thoughts on “Long Ke Wan: Beside the Seaside”