With breakfast consumed, the tent packed away and our backpacks on, it was time to leave the glampsite behind and swap the picturesque hamlet of Boot for a pitch a stone’s throw from Britain’s “favourite view” (as voted by ITV viewers several years prior).

Opting for the short cut which avoided the “main” road, we exited Eskdale Campsite through a small gate at the rear of the site and picked our way through the bracken until we emerged from the overgrown footpath near Eskdale Mill. From there, we made our way up onto the moor – which at this point was covered in ferns and more closely resembled a jungle than a heather-covered moor. Veering away from Boot Bank (a disused quarry), we followed the Old Corpse Road which ran roughly parallel to Whillan Beck. The initial steep ascent soon gave way to gently undulating moorland.

3km later, we arrived at Burnmoor Tarn – a welcome opportunity to relieve ourselves of our rucksacks and have a well-needed snack break! On our return trip a few days later, we learned that the moor had its fair share of ghoulish legends. Although the agricultural hamlet of Wasdale Head has its own church, St. Olaf’s, it has no graveyard as the ground in Wasdale Head is bedrock, so graves couldn’t be dug. Instead, bodies had to be transported across the moor on a horse-drawn cart to Boot, where they could be buried in the graveyard of St Catherine’s church – hence the path’s name, the Old Corpse Road. According to legend, a young man’s body was being transported across the moor when the pony took fright and bolted. Shortly after, the man’s grief-stricken mother also died – and disappeared in similar circumstances on the moor. A pony and coffin was later recovered, but it was the son’s, not the mother’s. The son was given a proper burial, but the location of the mother’s body remained unknown. Legend has it that after dusk a ghostly horse can be sighted on the moor, pulling the missing coffin . . .

After a chat with some friendly American glampers who had hiked over from Coniston, we picked up our packs and continued our walk – with amusing results. Laurence misjudged a bog and ended up ankle-deep in it with a very muddy boot . . .  whilst I mistook a cowpat for a rock and trod right into it, whoops. Countryside 1, Laurence and Rosie 0. 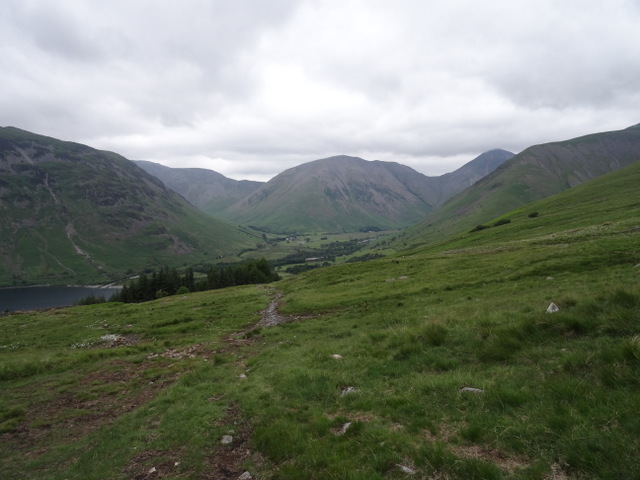 A little further on, the eastern shore of Wast Water and the valley floor came into view. Scattered evergreens and pockets of habitation, bordered by England’s highest fells and deepest lake, completed this idyllic view.

Descending from the moor, we passed through ferns and woodland before Wasdale Head Hall Farm came into view and, later, the National Trust Wasdale Campsite.

After a quick detour to the shop to receive our Green Discount (essentially the standard price minus the car parking fees, a useful £15 saving) and receipt to display on the tent, it was time to pitch up. Usually, our little tent can be pitched in around ten minutes – but on this occasion, the ground was having none of it. As we’d learned that the ground was bedrock on our return trip, at this point we had no idea why we were having so much difficulty! Almost an hour later, we had bashed all the pegs into the ground (and dented a couple in the process) and were ready to consume our body weight in Pringles before embarking on a hike-turned-scramble round Wast Water.