With the heat already building up, we began the walk up to the Alhambra; the route was shaded, with fountains and ruins along the way. Upon arrival, we joined the queue to collect our tickets . . . and upon collection it became immediately apparent that a student ticket was in fact only applicable to someone holding a Spanish student card. Lesson learnt: don’t book tickets through the Spanish site if you don’t understand Spanish (as my mum did) and are therefore unable to read the small print. A stone’s throw from the Alhambra’s entrance is Jardines Alberto Restaurante, which is perfect for a cold drink and a bite to eat before (or after, or both) touring the complex.

Since we had arrived well in advance of our allotted time for the Nasrid Palaces, we began by visiting the Museo de la Alhambra and the Museo des Bellas Artes, both of which are well worth a visit if you have the time (or, if like many visitors, you just want to escape the heat and enter air-conditioned heaven.) Likewise, a self-guided wander around the Baño de Comares is an essential item on any Alhambra itinerary, especially if you haven’t yet seen examples of Moorish baths.

The Alcazaba, the military unit contained within the complex, affords superb panoramic views of city, particularly of the Albaicín which was the former Moorish quarter of the city. It once housed the royal guard, though only remnants remain of their living quarters. 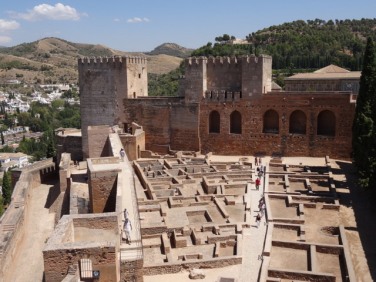 After exploring the Alcazaba, we made our way to the Nasrid Palaces; make sure you’re in the queue in advance of your allotted time, because in this case if you snooze, you definitely lose. Once in the Nasrid Palaces, you can spend as long as you like in there admiring the endless tiled floors/ceilings/walls, intricately carved stonework and general palatial grandeur. From recollection, we spent about an hour wandering around, though if you’re armed with an audio guide I’m sure it would take considerably longer! The Nasrid Palaces are estimated to have been constructed in the 13th Century; the fact that much of the tiling and intricate décor remains largely intact is testament to their position as an icon of Spain’s Moorish past.

Within the Nasrid Palaces there were several open-air courtyards, adorned with shrubs and sculptures and bordered by arches featuring intricate masonry. It was a rather astonishing experience: just one arch would be enough to make most people gasp in awe, but the effect of an innumerable number of them was mind-blowing.

Whilst touring the Nasrid Palaces, don’t forget to look up: a lot of the spectacular stonework will be above you! The ceilings of many rooms contained mesmerising tiled ceilings, brought into relief with shafts of light seeping through the skylights. 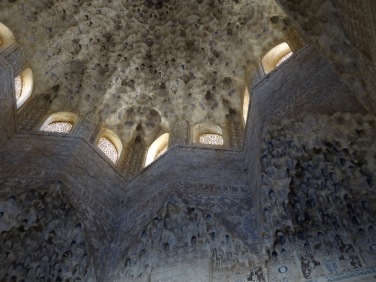 After concluding our tour of the Nasrid Palaces, we spent the rest of the afternoon (read: several more hours) exploring the Generalife and its beautifully landscaped gardens. En route to the Generalife, there were yet more buildings and towers to explore, which merit a look if you want to do a comprehensive tour of the complex. The Generalife was, in comparison to the Nasrid Palaces, remarkably simple with a whitewashed exterior and limited décor. The garden’s tranquillity was largely offset by the presence of an overwhelming number of selfie sticks, though fortunately it was possible to escape the throngs by choosing an alternative path. To the west, turrets rose out of the vegetation; to the north, a close-up view of the Sacromente quarter, known for its long-standing traditional flamenco shows. 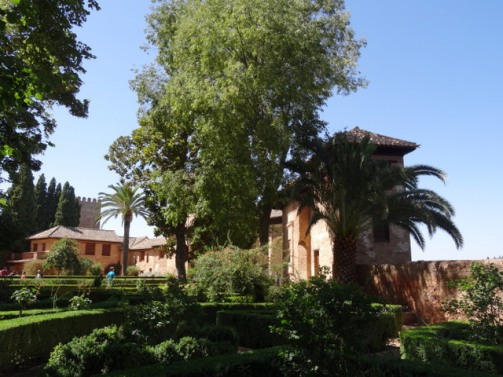 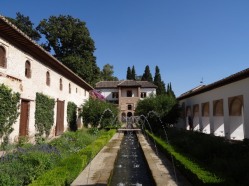 The Alhambra deserves a place on any Granada itinerary; here are a few tips that are worth bearing in mind: