Surrounded by stunning scenery, Snowdon sits in the heart of Snowdonia National Park, a stone’s throw from the small mining town of Llanberis. It’s an easy day trip from neighbouring towns and cities; from Chester it’s only an hour’s train ride to Bangor (the nearest mainline train station), followed by a forty minute bus journey (the current timetable for the 85/86 bus can be viewed here) to Llanberis. If you’re travelling by public transport, it’s best to make your way up the mountain in the morning, giving you plenty of time to take in the incredible views and hopefully eliminating any chance of missing the last bus back to Bangor!

There are numerous paths which will take you to the summit, and if you want to go up one and come down another, then you can take advantage of the Snowdon Sherpa Bus* to get around the park. From Llanberis, the easiest path to take is the Llanberis Path (also referred to as ‘the tourist path’, due to the high volume of tourists found ambling up the mountain, often inadequately prepared, on this route) which is signposted from the Snowdon Mountain Railway Station. 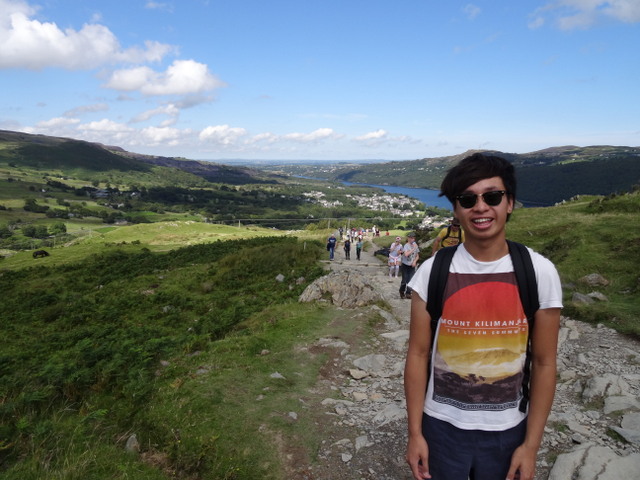 My most recent trip to Snowdon was in August, with my boyfriend who had never climbed Snowdon before (and it was only his second visit to Wales). Since we were travelling by public transport, we ended up climbing the Llanberis path. We quickly found out why it had earned the nickname “The Motorway”: the hoards of tourists and ill-equipped wanderers (yes, I’m referring to those wearing jeans or flip flops) meandering up the path could easily be likened to cars crawling up the M1 in heavy traffic. Last summer, when I climbed Snowdon with my cousin and sister, we had descended via this path and I’m sure it wasn’t quite that bad . . .

Nevertheless, we were rewarded with fantastic aerial views of Llanberis and Dinorwig Slate Quarry as the path snaked upwards, with the Snowdon Mountain Railway running almost in parallel. After the Half Way House (open seasonally, selling ice creams, snacks and the like), the path turns into a scree slope which is a little wearing as it’s difficult to keep up a consistent pace on such uneven terrain. Further on, the Llanberis, Pyg, Miners and Snowdon Ranger paths all converge; at this point it’s around ten minutes to the summit. 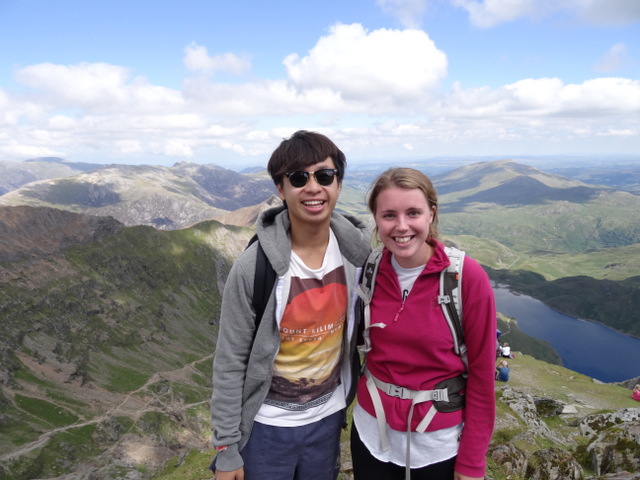 On my previous visits, the clouds conspired against me: it would be nice and sunny until we reached the summit . . . and then the clouds would descend, enveloping us in a thick mist and leaving us without a view. This time, however, they didn’t: it stayed beautiful and sunny (and a little cool) and for the first time ever I got those panoramic views that are illustrated on the monument at the summit. Hooray!

If you’re planning a trip to Snowdonia to conquer the highest peak in Wales, here’s my advice to ensure a smooth trip:

Hopefully, if you’ve never been, this post inspires you to go: it’s an unmissable item on any North Wales trip itinerary! If you’ve got any other tips, feel free to comment below.

*Disclaimer: I’ve never actually used this service myself, so cannot comment on its frequency etcetera, but it is generally thought to be a reliable service.