Nearing the end of our trip, we visited one of America’s oldest cities: Boston. From Philadelphia, it was about a seven hour bus journey, with a change in New York. The dirt cheap ticket ($12.50 per person) came at a price on this journey: putting up with the guy across from us blasting (awful) music out of his headphones at full volume, not exactly great when all we wanted to do was sleep after getting up at 4 am. Unluckily for us, we also ended up with the exact same guy doing the exact same thing on our return journey to New York, where we ended our trip.

Rant aside (I’m British, it’s just something we do), we had a fantastic time in Boston – and certainly packed a lot into our allotted two and a half days! Hostels were ridiculously expensive (read: prices rivalled New York City), so we used Airbnb instead which worked out really well. We were a little out of the centre, but it was half the price of staying in a hostel so it was worth the compromise. If you’re on a similarly tight schedule, here’s (some of) what we did in the short amount of time we had in Boston . . .

So, you’ve seen Boston Common and its cute little frog pond (complete with adorable frog figurines) . . . what next? If you follow the main path in Boston Common away from the direction of Massachusetts State House, you’ll leave the park and end up on Charles Street. Cross the road and you’ll discover the beautifully landscaped Boston Public Gardens. There’s a large lake (complete with swan boats), a statue of George Washington, the nation’s founder, and much more. If you plan on taking a picnic, check out the baked goods (particularly the muffins!) at Uno Dué Go, which go down to half price after 5 pm.

The ultimate tourist thing to do in Boston: follow the Freedom Trail through the city, learn about the history of the city and take a bucket load of photos along the way. If you want to complete the full trail, allow plenty of time. The Freedom Trail starts at Boston Common; you can pick up a map at the Boston Common Visitor Centre for free. It’s a great way to see Boston’s historic buildings, nestled amongst the modern skyscrapers of the Financial District and the perfect way to get your bearings! 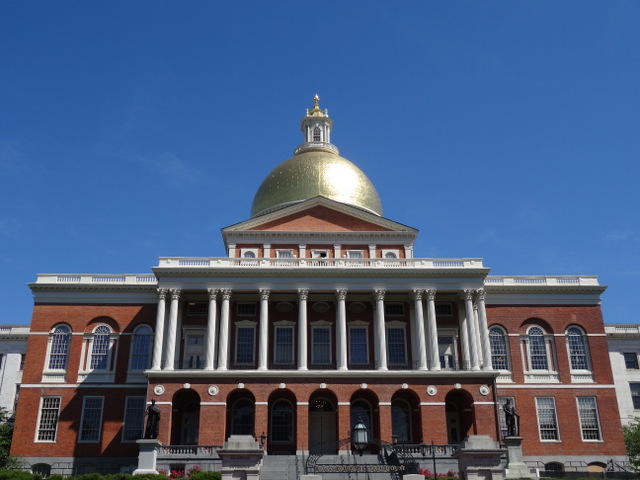 Conveniently located on the Freedom Trail, if you started in the morning then you should reach Quincy Market in time for lunch. To me, it felt somewhat more commercialised than other markets. That said, there was a great selection of food; my priorities lay with finding a decent wedge of carrot cake, whilst Laurence sought out a lobster roll. Some things are a little pricey, but if there’s something in particular you want to try then it’s worth a trip.

Technically, this is part of the Freedom Trail. However, most people probably just take a look at it, perhaps read the signs, take a photo and head back into town blissfully unaware of the fact that it’s free to go up this tower (which boasts a similar design to the Washington Monument in D.C.) and take in a panoramic view of Boston. Visit the Bunker Hill Museum to obtain your tickets (allocated on a first-come, first-serve basis) to climb (yes, you read that right – there’s no lift here) the Bunker Hill Monument. Inside the museum you can learn about the Battle of Bunker Hill and view some of the proposed designs for the monument.

A metro ride out of Boston takes you to the world-famous Harvard University. You can either explore Harvard Yard by yourself (free maps are available from kiosks just outside) or if you want to learn more about the history of the university and some fun facts, you can take a tour, given by a current student at the university ($10 per person); we opted for the latter. Our tour guide was great and provided us with lots of interesting information about the traditions (both unusual and utterly ridiculous), superstitions and history of this world-renowned university. 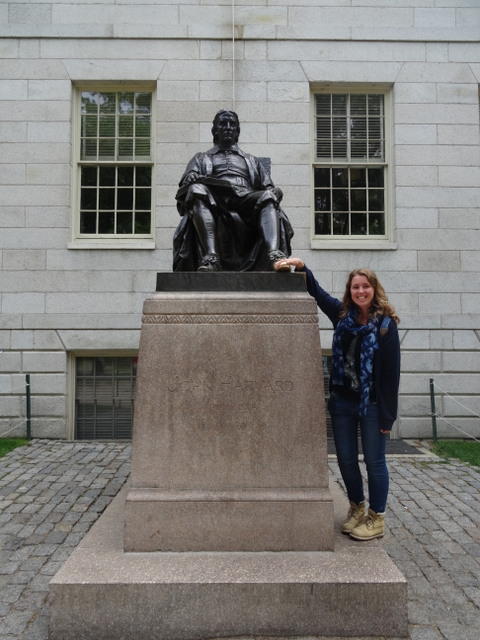